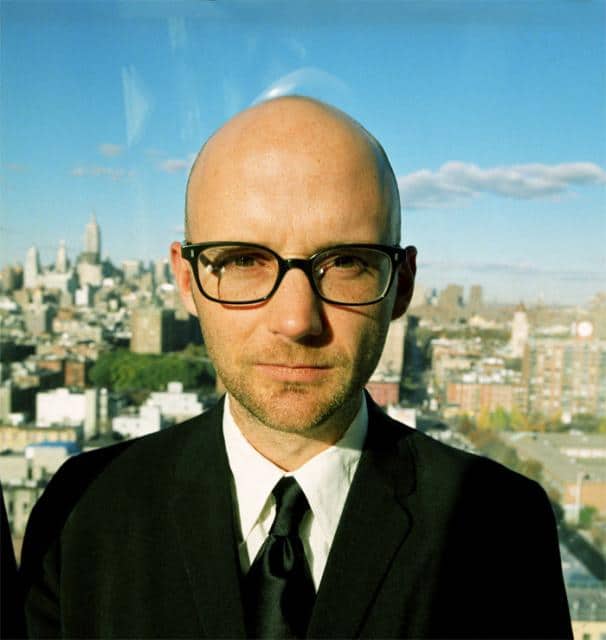 Moby is a legend. There is no question that without the bald virtuoso of the dance, EDM would be nothing that it is today. On December 16th the icon will bring back a true classic to the presses. ‘Hotel: Ambient' the once limited edition companion disc to his incredible 2005 album, ”Hotel‘ will get remastered and re-released with a couple previously unreleased track. A few special events are going to go along side the release as well.

On December 16th Moby will perform a special show featuring ‘Hotel: Ambient' and on the 21st he will again reprise the show as a fundraiser for the Intergratron of Joshua Tree. You can still get tickets to Moby's December 16th show in LA here. And on the very same day, ‘Hotel: Ambient' will be available for purchase and for free through mobygratis, which is a resource Moby launched in 2008 for aspiring independent and non-profit filmmakers.

The show at the Masonic Lodge will be unprecedented in its visual display.  Three large screens will feature imagery created by Moby specifically for the show, along with previous collaborations with his frequent collaborator, cinematic genius David Lynch, and archival footage – all processed and manipulated live by visual artists.

The idea is that the show starts very quietly, then slowly builds,” Moby says. “By the end, it’ll be more dance oriented – not hands-in-the-air raving, though, but more experimental. Through the course of the set, there'll also be ambient reworkings of my better-known songs like ‘Porcelain,’ ‘We Are All Made of Stars,’ and newer ones like ‘Almost Home.

The remastered album is a look back at Moby's roots and inspirations and features many tracks which have since made their way onto the scores of many films. For those of you who witnessed one of Moby's awe-inspiring sets this past summer on the festival circuit this is truly one not to miss. It may be a different vibe than a main stage DJ set, but it has the same beautiful artistic integrity that Moby is known for. Here is what Moby had to say about the re-release:

I first heard, and heard about, ambient music on the b-side of david bowie's ‘heroes'. As much as i've loved writing songs and dance tracks i've always been obsessed with the ways in which ambient and instrumental music can transform the space in which their being listened. i also really appreciate the subtle and at times un-demanding qualities of ambient music, and the ways in which it can unconventionally reach people emotionally.

We for one are very excited to see how this will play out. As with a creative mind behind a project like Moby's the possibilities for greatness are unlimited.

In this article:Hotel: Ambient, Moby

It brings me an ample amount of joy to make the following statement; 2018 is the best year dance music has had in a...

It's Friday, January 5th and that means that we have new music to get your weekend poppin'. As we make our first playlist of...