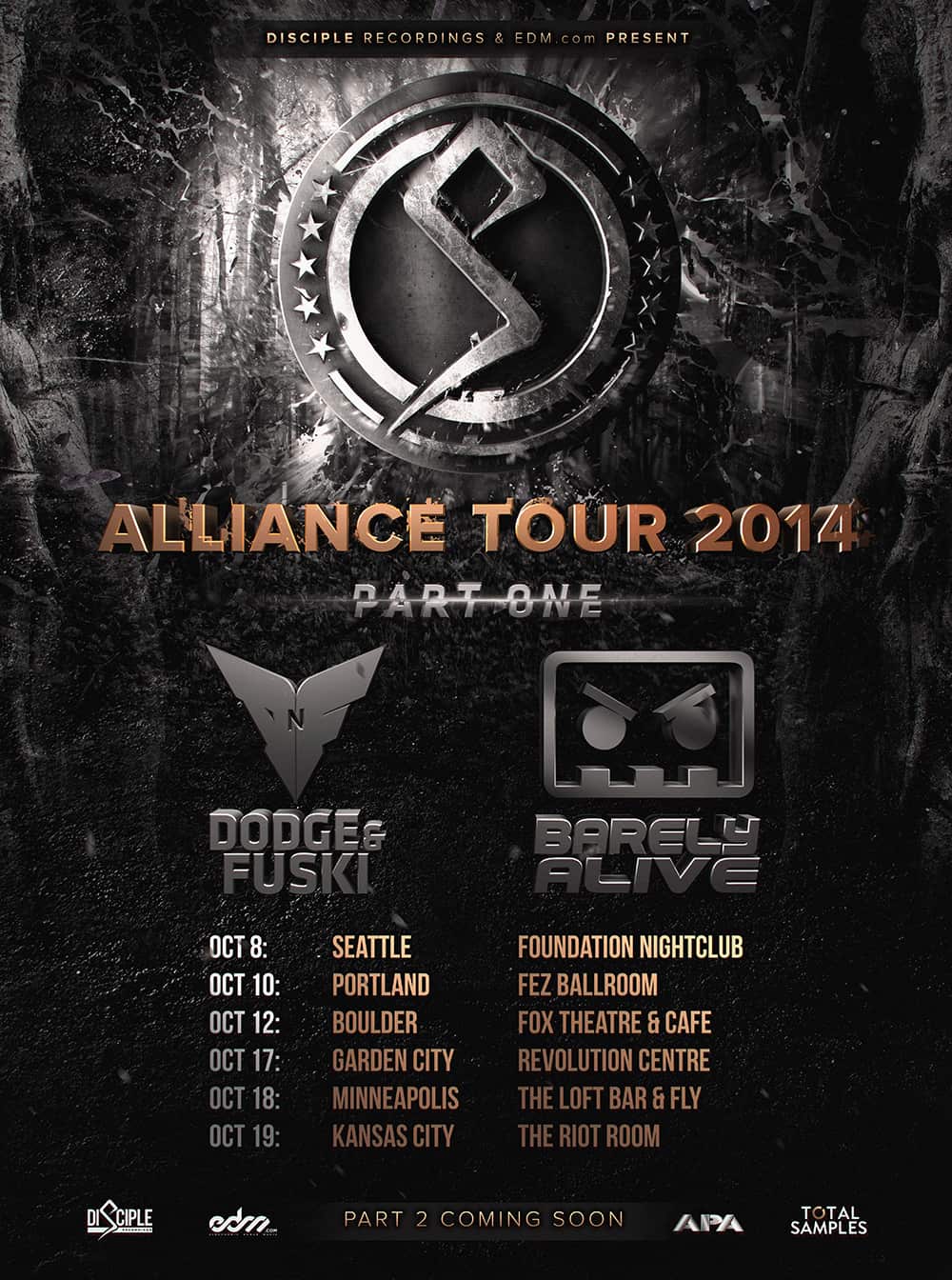 EDM Sauce recently had the opportunity to chat with Rob from Dodge & Fuski and Willie from Barely Alive, who are both on the road this month on The Alliance Tour.  UKF Dubstep recently premiered their new collab, Poison, which just yesterday made it to the #1 spot on Beatport's Dubstep chart. We talked about their current tour and future plans, and the guys were kind enough to share some thoughts about major influences, being compared to Skrillex, and overseas differences in EDM… plus more!

Me: There’s only a select few US cities that you’re hitting on this tour – are there any cities in particular that are on your bucket list for the future? Any that are favorites?

Willie: LA is definitely a big one for us, as well as our home city of Boston. This is only the first phase of the Alliance Tour and we’re sure the next run will be huge!

Rob: I still haven’t been to Hawaii so I’m going to go with Honolulu as it’s the only city I’ve heard of there.

Me: I've also never been to Hawaii, but I have been fortunate enough to visit the UK – Rob, what would you say are the biggest differences in the dance music scenes here and there?

Rob: People in America often have a much more brash taste in music and therefore it usually works best to stick to a fairly consistent Bass Music set – I try to chuck in a bit of a drum & bass section but it’s always a bit of a curveball depending on where you are. I would say the UK scene on the other hand has a lot less tolerance to prolonged aggressive music, so you need to mix it up a lot more to keep people interested.

Me: You've both had the opportunity to guest mix for Annie Nightingale on BBC Radio 1 – how does it feel to be recognized by such a renowned station?

Willie: When we got invited onto the show it was some of the best News we ever heard! Playing on Annie’s legendary show was an awesome experience and we hope to do it again soon.

Rob: Radio 1 is a mainstay in youth music culture in the UK so it’s always nice to get airplay from them. It’s not a commercial radio station so they have a lot more freedom especially in the evenings to cover less mainstream music.

Me: Speaking of mainstream, you guys draw a lot of comparisons between yourselves and Skrillex. That's such a generalization for any dubstep sound, so what artists have actually been influential for you guys, and why?

Rob: That is definitely a sweeping generalization. I would say it’s hard to pin it on anyone in particular as everything has become a bit of an amalgamation of everything else at the moment, but recently I would say Must Die, Trampa and Eptic are probably all influences in what I’ve been making.

Willie: Before we started making dance music, Matt and I made hip hop beats. We looked up to great producers like DJ Premier and Pete Rock in a similar way that artists like Skrillex are now looked up to by so many aspiring producers. It’s hard to say how much our hip hop background has influenced our new sound, but it definitely had an impact on the way we produce music.

Me: What’s next for you guys after the Alliance Tour?

Rob: I’m just finishing off my next 2 releases, there’s been a bit of a break from Dubstep for DnF so it’s actually been quite inspiring to get back to it.

Willie: Once we’re both back home it’s right back to the grind with making new music. We’ve got so many new ideas its almost become an organizational problem, but things are quickly shaping up and we should have the next set of releases out soon!

Thanks again for Rob and Willie for taking the time to chat with us at EDM Sauce!  Expect to see a lot of these guys in 2015, and visit them through any of the links below!