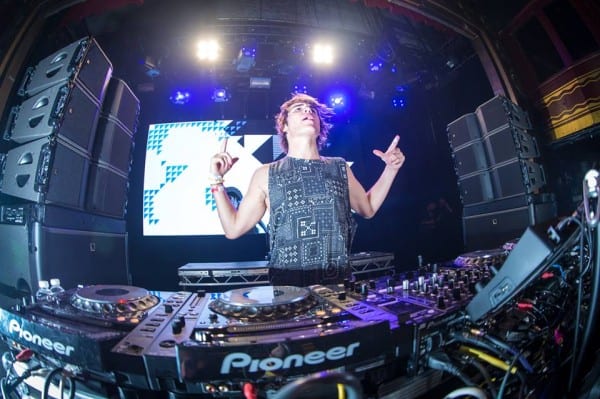 This past Saturday, I had the wonderful opportunity of interviewing Danny Avila
before his set at Webster Hall in New York City. Rocking black ripped skinny jeans and black tank, Danny greeted me with a smile and hug before we began our Q&A. Just arriving from Miami, Danny was pumped to perform once again in NYC.

Last time I was here I played at Electric Zoo and it was amazing. I especially like Webster Hall, I played here twice already and the shows were sold out. I love New York and I think honestly New York is my favorite city to play in. The crowd here is really good and really dedicated. There's always great energy here.

Rising to international fame in 2012 at the age of 17, Danny remains one of the youngest electro house DJs out there. While he has accomplished more than most at his age, he's doing what he loves and isn't letting anything hold him back.

As an artist you have to prove yourself every single day no matter your age. It is true when you are young some might say ‘this person is young…he's not able to play. He didn't have enough time to learn' but if someone is talented…not saying that I am or I'm not, but age should not matter.

Known for his hit tracks such as ‘Tronco,”Voltage' and ‘Poseidon' just to name a few as well as his successful Sirius XM radio show “Ready to Jump!” Danny is hard at work and lets us in on what we can look forward to.

After this year's summer tour, I got back in the studio and I have about five new tracks that are almost ready to go. I have one track on Steve Aoki‘s Record Label Dim Mak Records where I work with a French DJ, Merzo a very talented guy and I am very happy with that track. I'm also working on my bootlegs too. I recently did a bootleg of Ellie Goulding's “Burn” which I put out and I'm working on a bootleg for John Legend's, ‘All of me.' I want to keep doing more of them.

Apart from new music, Danny is always giving his fans more and has many more expectations for the remainder of the year.

I'm still on tour, I just finished my summer tour in August and I'm doing a world tour right now. Going pretty much everywhere Europe, Asia and I'm going to Brazil next week. Also, during my summer tour, I had my video photographer come on tour with me. There's a really cool Documentary coming out in the next few weeks and we also recorded this whole weekend. Keep an eye out for that I think it's going to be a really cool after movie.

After the interview, Danny took to the stage playing to his dedicated NYC fans, some even holding up the Spanish flag showing their support. Delivering amazing energetic builds and hard drops, Danny electrified and kept the crowd dancing all night long.

Danny Avila has dropped an extra-special track to celebrate his 24 years on the planet – ‘Thinking About You’. Always sure to provide an...

Danny Avila has been enjoying an EXPLOSIVE 2018 so far. With his single “Too Good To Be True” passing 10 million streams on Spotify,...