Above & Beyond Group Therapy 100 Will Be Streamed Live
Advertisement 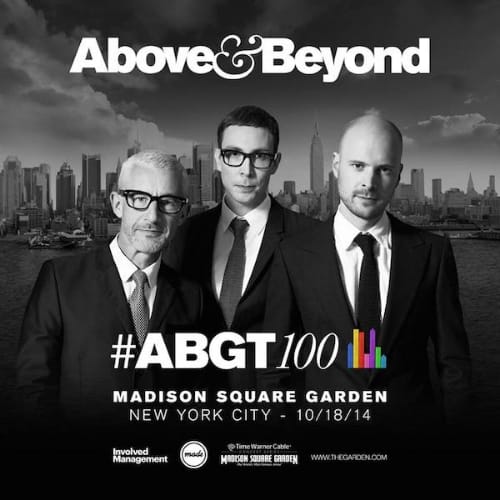 Above & Beyond‘s Group Therapy podcasts have reached the 100th episode milestone! To celebrate, ABGT 100 will be recorded live at the historic Madison Square Garden in New York City on Occtober 18th. If you can't make it to New York that night, we have good news for you! Announced on Group Therapy 99 and on the group's social media pages, you can live stream the event via Youtube. It's also been announced that the production team behind the live streams of TomorrowWorld and Ultra Music Festival will be on board to make this the best experience possible.

We're expecting amazing things from ABGT100. For the past two weeks, shows at Madison Square Garden are all that people have been talking about. It started with the Eric Prydz and his light show featuring a mesmerizing 4K hologram 2 weeks ago. Also this past weekend Bassnector, with huge support from Paper Diamond, Rusko, and Big Gigantic, also brought an amazing show. Judging from a recent pic posted from Above & Beyond's sacred studio, they have some surprises lined up.

Artists that have been featured many times on Group Therapy; Ilan Bluestone, Andrew Bayer, and Mat Zo will also be part of the experience that night. As an added bonus, Jono announced on ABGT 99 that an Above & Beyond Deep set will be provided live from their radio studio as soon as the doors open.

Advertisement. Scroll to continue reading.
In this article:ABGT, Above & Beyond, Group Therapy