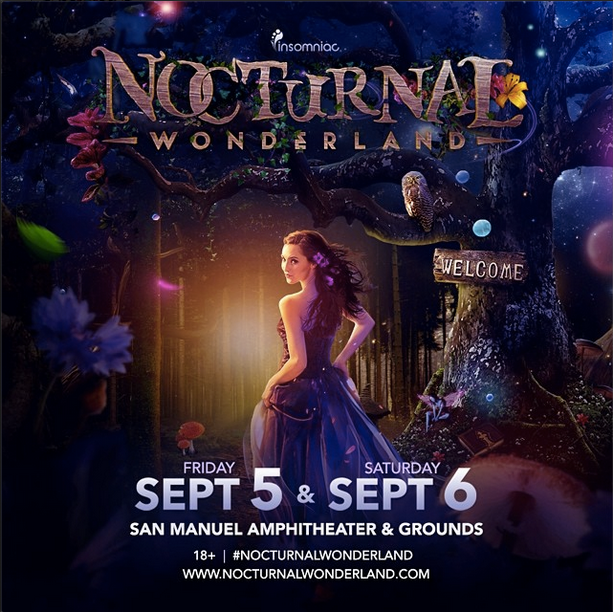 It's finally the week of Nocturnal Wonderland 2014 and we at EDMSauce are simply ecstatic. The prospect of such a highly-touted festival going on always fills us with either jealousy or anticipation. With such an amazing line up, I had a tough time coming up with a comprehensive list but nonetheless, it needed to happen. So without further ado, check out our choices for the ten best acts.

Started by the duo of Maarten Hoogstraten and Paul Baümer, the Bingo Players have become one of the most sought after acts in the EDM world. In between playing festivals, the duo found the time to start their own label, Hysteria Records. They would work together and build a lasting friendship for the better part of 15 years, until Paul passed away from cancer in 2013. With the blessing from his best friend and musical partner before he passed, Maarten continued making music and stayed with the moniker of Bingo Players. From their breakout hit, “Cry (Just A Little),” to the recent “Knock You Out,” Bingo Players know how to wow a crowd and I've yet to hear of them disappoint.

Cash Cash consists of brothers, Jean Paul and Alex Makhlouf and friend Samuel Frisch. In their time in the circuit, this trio has gained support from some of the biggest names in the EDM world, including Tiesto, Hardwell, and Nicky Romero.  Their first official Big Beat release, “Take Me Home” ft. Bebe Rexha, was hailed as the “best new track… heard in a long time” by Sirius XM BPM host Austin Kramer. With other hits like “I Like it Loud” and “Michael Jackson,” not to mention their remixes of Krewella’s “Alive” and Capital Cities’ “Safe And Sound”, Cash Cash is one act that will be hard to follow.

Swedish DJ and producer Adrian Lux has earned support from artists such as Avicii and Axwell, with Axwell even remixing Adrian’s hit track “Teenage Crime.” Starting the year off with a HUGE collaboration with Cash Cash that brought us “Bullet,” Adrian has also done remixes of music by Lana Del Rey, Deborah Cox, and Basement Jaxx just to name a few. His versatility and repertoire make him a definite must see at Nocturnal Wonderland. The man knows how to control the energy in a crowd and his sets are always a pleasure!

Anthony Maniscalco, AKA Hook N Sling, is from a little known place in Australia known as Bondi Beach. He has remixed for some of the biggest names in the Music Industry including Calvin Harris, Fedde Le Grand, and Wolfgang Gartner and has had his own song, “Tokyo By Night,” remixed by Axwell. His meticulously crafted productions have ascended him to one of the top acts in the EDM scene today and his dance floor precision tracks and collaboration with Empire of the Sun show his never ending pursuit of future sounds.

Los Angeles, California native, Vice has been named one of “America’s Best DJs,” performing for sold out crowds across the United States. Unrestricted in no way, shape, or form, Vice will take you from his hit song, “World Is Our Playground” to his remix of “Crime” with Kendrick Lamar. His repertoire of remixes includes music by Linkin Park, Capital Cities, and Tegan and Sara. Vice is one DJ who’ll take you on a musical journey you just don’t want to miss.

Of course, who could forget The Glitch Mob? This trio hails from Los Angeles and consists of edIT (Edward Ma), Boreta (Justin Boreta), and Ooah (Josh Mayer). They boast a wide range of remixes including Daft Punk’s “Derezzed,” The White Stripes’ “Seven Nation Army,” and Bassnectar’s “Breathe.” Their combinations of skills and aesthetics have made them one of the most beloved electronic acts and distinctive artists working today.

Another one of Los Angeles’ native sons, Sean Rodela, aka BARE, is a fourth generation Mexican American from East Los Angeles who was raised in LA’s historic rave scene. Starting off with Dubstep, BARE began to experiment in different sounds and now his repertoire of music spans multiple genres. He has widespread support from some of the biggest names in the music industry, including Tiesto, MAK J, Hardwell, Sander Van Doorn, and plenty more. BARE wins us all over with his humble attitude and his connection with each fan. His #TEDDYBARE personality is as amazing as his music and his fan base will only continue to grow, making him a must see artist this weekend.

Having grown up playing the piano, guitar, and singing, Justin Blau, AKA 3LAU, vacationed in Sweden, where he discovered Electronic Dance Music. After gaining recognition for his two bootlegs for “Girls Who Save The World” and “All Night Long,” 3LAU also won a remix competition for his remix of Tiesto’s “Work Hard, Play Hard.” His melodic take on dance music and live sampling during his sets make it that much more exciting!

Tyson Illingworth, AKA tyDi, is an Australian songwriter and music producer who was signed onto Armin Van Buuren’s Armada Label at 17. He was also Australia’s #1 DJ in 2008 and 2009, making him the youngest winner of this prestigious award. With his new album coming out on September 30th, we'll be sure to hear some of his new songs like “Somebody For Me” and “Box of Leg” and maybe even his reworks of Lorde’s “Royal” and Blink 182’s “I Miss You.”

Ben Hall and Simon James make up Delta Heavy, a Dubstep duo with widespread recognition, creating remixes for Rita Ora, Avicii, and Nero, all while still dropping incredible hits of their own. While their current music is more song oriented, Delta Heavy is currently working towards their debut album, designed to satisfy everyone’s musical tastes. Having just released their Apollo EP earlier this year, Delta Heavy will be sure to bring the energy and have the crowd going at Nocturnal.

All right, so if you're counting, yes this is number 11, but we couldn't leave out Nicky Romero. With his impeccable work ethic and driving force, this man is one of the biggest reasons why EDM is so big. His radio show, Protocol Radio, is syndicated to more than 60 radio stations and captivates over 40 million listeners every week. Always advocating for his art, Nicky Romero continues to up his game in every possible way and this makes him a definite must see at Nocturnal this year.

With so many great performers, this was one tough list to make! Every one of these DJs and producers are worth watching. If you see me roaming around, say hi! I'll be the big guy with the Salvadorian Flag and Brown Bear Ears! If you still haven't bought your tickets, don't worry! There's still time. Click here to make sure you join us as we travel down the rabbit hole once again!

Fresh off the back of “Too Good To Lose” feat. The Ready Set,  Electric Polar Bears return today enlisting esteemed Australian DJ/Producer tyDi for...