What the Hell is Big Room House Music?
Advertisement 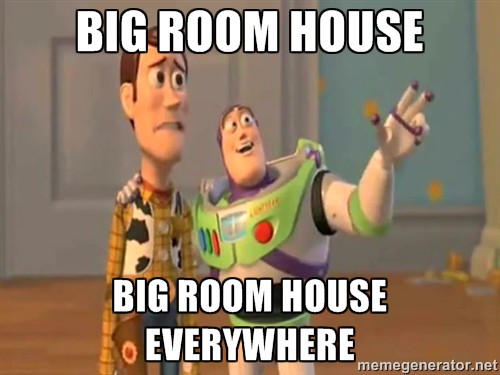 Dance music enthusiasts tend to be opinionated. We all have our own ideas as to what the catalyst was that started modern big room house. Most remarkably, the sub-genre is, essentially, solely responsible for Hardwell's position atop the DJ Mag top 100 poll of 2013, and Martin Garrix's headliner status.

An entry in the Urban Dictionary suggests the following recipe for big room house:

DJs, including social media guru deadmau5 and Porter Robinson actively spoke out against the generic, unoriginal sound of big room. Tracks were punctuated by simply designed heavy drops loaded with wood sounds or string plucks. There were so many rules restricting tempo, length, build-up, intro, and endings that prevented any creative thinking.

Also on Urban Dictionary: “…in the end, big room gave all house music a bad name because of it's repetitiveness and dumbed-down formulaic sound.”

But is it really that simple? Did it all start with a 17-year-old who made a big room beatport hit and then it spiraled out of control from there? Or was this something that started a long time ago, and has slowly evolved like other dance music sub-genres?

One of the most influential trance anthems of all time: “Insomnia” by Faithless. This song was voted by mixmag as the 5th greatest dance song ever. Even if the title is unfamiliar, almost all EDM fans will recognize the crescendo. It's been almost 20 years since it's original release, but the strings and minimal drop in “Insomnia” are still heard at festivals around the world. These are the origins of big room house. Faithless were the first to experiment with this style of trance music, and the sound is undeniably similar to modern big room.

Check out Faithless performing “Insomnia” live from Brixton in 2011:

More than ten years after the release of “Insomnia”, Tiesto completed production of his third studio album “Elements of Life”. One track featured on the CD was “dance4life”, a song made to help AIDS support around the world. “dance4life” was co-produced by Maxi Jazz (lead singer and frontman of Faithless). Looking around the “Elements of Life” album, it's obvious that Maxi Jazz & Faithless had a heavy influence on several of the tracks; perhaps, most notably, “Carpe Noctem”.

There are typically two distinct parts that encompass the familiar big room house drop; the drum kick, and the melody. In Faithless' “Insomnia” there was a very clear big room melody, but in “Carpe Noctem”, Tiesto ties together a similar sound with a heavy drum kick.

“Carpe Noctem” was a massive hit on Tiesto's Elements of Life world tour. Tiesto playing in 2007:

In 2011, two unknown producers took the world by surprise with the release of “Epic”. This new rendition of big room used ideas from electro and dirty dutch production in unison with Tiesto's design of “Carpe Noctem”.

Quintino & Sandro Silva's collaboration was a huge success at festivals around the world in 2012 & 2013. Few songs stand the test of time and can maintain playability from one year to the next; but “Epic” brought something new to the table. Producers wanted to duplicate and reproduce it's energy.

As “Epic” gained traction in the EDM world, there was an a massive dance music event that was about to take place in the United States for the first time, ever. Once known as “Sensation White”, now simply “Sensation”, made it's American debut in 2012. Sensation is known for it's mind-blowing indoor theatrics. Some might say that the title “big room” was inspired by the massive sound and feel at a Sensation event. The styles of music varied from tech house to electro but there was a special feeling when immersed in such lavish surroundings. The 2012 New York lineup covered a Friday & Saturday night and included Mr. White, Fedde Le Grand, Dennis Ferrer, Joris Voorn, Nic Fanciulli, Mark Knight, Danny Tenaglia, and 2000 and One.

Sensation has always been a favorite venue for DJ/Producer Fedde Le Grand. In 2012, he dropped one of the most innovative, creative, and emotive sets that I've gotten to see first-hand. Bringing in sounds from European big room specialists Jewelz & Sparks, in addition to his own Sensation-ready edit of “Insomnia” helped propel the big room genre even further onto the American dance music scene.

Martin Garrix will forever be remembered for his extended stint atop the Beatport top-100 list with his single “Animals”. Animals gained popularity through Tomorrowland 2013 live sets and radio broadcasts. Garrix was the youngest DJ to solo-produce a Beatport No. 1 song.

“Animals” grew to quickly become the standard of big room house music. It's popularity and over-exposure probably contributed to harsh critics condemning the sub-genre as played-out and unoriginal.

In mid-2013, American radio had only just began accepting dance music as a popular genre. Animals broke instrumental barriers and sold more than 1,000,000 copies nationwide. This song has become as big a part of EDM culture in 2014 as songs like “Sandstorm” and “One More Time” were at the turn of the century.

Like most music trends; things come full-circle. 19 years after “Insomnia” intertwined big room with trance for the first time; Armin van Buuren does it again. In 2014 the trance king has put his own spin on big room with “Ping Pong”. Drawing from modern big room energy and old-school, original trance design, Armin has done an excellent Job of bringing the big room feel back to the trance world.

We aren't only big fans of Armin, but we are huge fans of pushing the limits of big room house. People are, perhaps, too quick to judge big room. Despite having roots in the mid-'90s, the sub genre is still in its infancy stage. We can see the sounds and style used in big room expanding across other genres. Just like in “Ping Pong”, trance, electro, and even deep house has started to pull from big room style.

There is a live energy within big room house that's difficult to find in other places. Not only is it powerful, but it's unifying. Like all house music it's meant to bring people together; to dance together, and to be happy together.