Who Are the Most Powerful DJs in Dance Music?
Advertisement 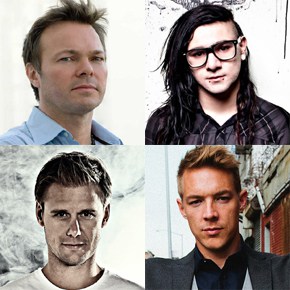 The EDM industry, recently appraised at $6.2 billion, is controlled by a handful of people; only some of them are DJs. These DJs / Producers / Record Label Tycoons aren't only spinning at night clubs and rocking festivals – they're dominating the industry from behind closed doors. These are the DJs who hold a controlling interest in the world's dance music industry:

Skrillex is owed a debt of thanks from all dance music fans. He can be credited, perhaps, in lifting electronic music into the world-wide mainstream. Skrillex has taken the dance music out of the dance club and brought it into the public's eye. His label “Owsla” has signed some of the world's biggest artists including Zedd and Porter Robinson. From playing 3-hour sets at Coachella, to back-to-back nights at the Red Rocks Amphitheater, Skrillex and his half-dozen Grammy awards has played a huge part in the structure of dance music today, and will continue moving forward.

In case you were living under a rock; Diplo played 210 shows in 2013. Diplo's Mad Decent Block Party has transformed into America's largest touring festival, including 22 events in 2014. Everything Diplo has touched turns to gold. Whether he's producing with famous pop-artists or underground hip-hop, he's the most innovative name in dance music and continues to push the limits of the genre as a whole.

Armada has grown into the largest Record Label in dance music; including 25 sub-labels. In addition to owning Armada, Armin van Buuren is a perennial contender for DJ Mag's No. 1 DJ.  Armin also hosts the largest, longest-running, most successful dance music podcast in the world: A State of Trance. Closing in on its 700th episode, A State of Trance (ASOT for short) features a weekly dose of the world's best trance, progressive, and big room. We never get tired of the annual ASOT global stadium tours.

BBC Radio 1's Essential Mix is the world's most recognizable dance music radio show. We've all heard Pete Tong's voice at some point in our music-streaming lives. In addition to hosting events on BBC Radio for what seems like a lifetime, Tong is also a founding partner in William Morris Electronic. Partnered with Joel Zimmerman, William Morris Electronic a talent agency featuring more than 150 of dance music's finest talents. Tong might not be the youngest name in dance music, but he's a Pioneer.