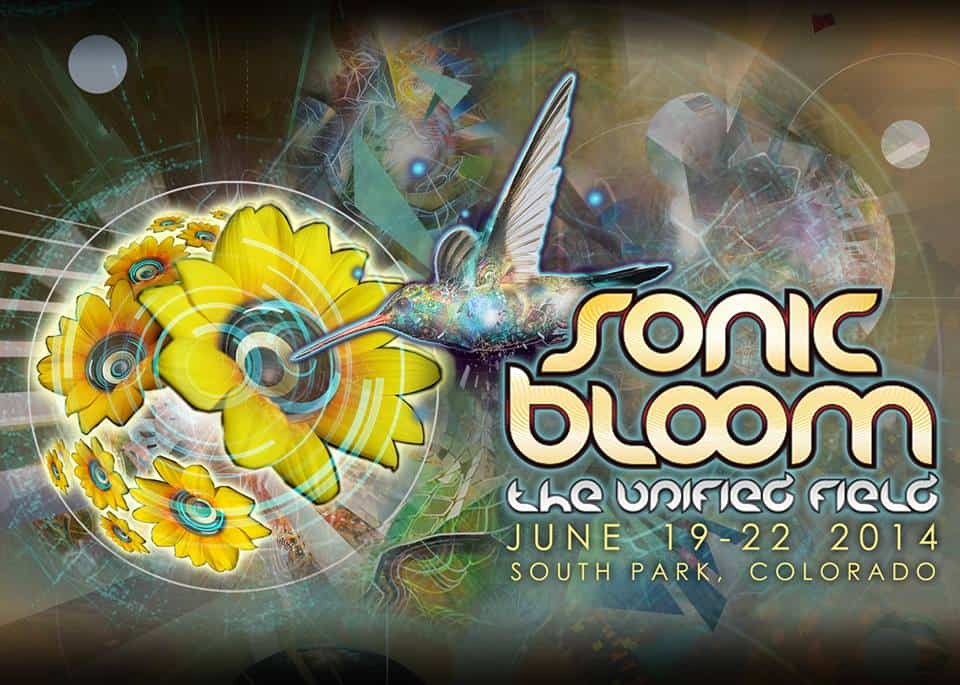 If you aren't going to be in Colorado this week, you might get a little upset after hearing about the magnificent Sonic Bloom Music Festival at the American Safari Ranch, which is less than an hour and a half outside of Denver. Set to go down June 19th – 22nd, the festival will bear witness to the Summer Solstice, which is going to be incredibly powerful for all those in attendance. You can check out if you have any friends going via the official FB event page here.

The lineup is absolutely stacked to the gills with talent and has more than one unique performance set to occur. Check the lineup or daily schedules posted below, for the full listing of artists, which might cause the jaw to go slack for a moment. But a few of the artists I'm excited for that aren't headlining the festival include Vibesquad, Zoogma, Dopapod, Supervision, Late Night Radio, Unlimited Aspect, D.V.S and Dynohunter. Click on any of the above to check out their soundclouds, all of which I highly recommend for great listening.

Earlier, when I mentioned unique performances, I wasn't kidding. The Michal Menert Big Band is set to perform for the first time and includes around 7 members, including Menert himself. One of the other amazing spectacular feats of music will be the Sonic Bloom Orchestra, which will close out the festival Sunday night. Included in this orchestral presentation will be “EOTO, along with Break Science, ZILLA & Dirtwire ft. David Satori from Beats Antique plus ill-ēsha, saQi, Kaminanda on guitar and a few more surprise guests.” The festival gods themselves cannot foresee the next time something this massively stacked with talent will happen again.

On top of having an amazing group of artists, the festival has a couple installations and accouterments that put this event over the top. In addition to possessing the Funktion-One sound system in CO, this festival boasts 21 live painters, 27 movement/yoga classes, and 30 guest speakers for workshops. Of special interest will be the intimate workshop that Andrew “Android” Jones will be conducting and presenting an Electro Mineral portait workshop. It's further described best here:

Android will create an electro-mineral portrait from a live model using the latest advancements in digital software and mineral hardware. [He will then] share his insight into the electronic creative art process and the psychology of how our brains are wired to need and appreciate art. Over the course of 2 hours, Android will work from a live model and take the students step by step from sketch to form, value, color and light, to a finished portrait.

In case your mind draws a blank at this visual artists name, its worth mentioning that Android Jones started his career with George Lucas at Industrial Light and Magic,  then proceeded  to work as the sole North American concept artist for Nintendo. [Source: Wiki] Android Jones and Johnathan Singer will be conducting the visuals for both of the 2 sets that Tipper is going to be performing on Friday and Saturday.

If this doesn't do it for you, or if you are still on edge about a 4 day festival getting grimy, there's great News. This year will offer a shower complex called The Oasis. One half of the Oasis is a mobile bathhouse with full service grooming and massage area, stacked with 12 open-air cedar shower stalls and a few sinks and changing rooms. The other half of this Oasis will be a shower alternative called All On Ark, an interactive foam blasting arena for groups. The foam area is powered by Dr. Bronner's Magic castille soaps, and even has a sound system and a cold rinse area. Click here to check out The Oasis in detail.

As an added bonus, to help support the community, Sonic Bloom will be giving a free limited-edition poster to attendees who donate 10 non-perishable food items. Unfortunately though, ramen noodles aren't accepted. That they had to say such a thing points to their knowledge of their audience, which I can't help but respect.

Tickets run pretty high for this festival, as Tier 2 has already expired. Tier 3 tickets are $215 plus fees, and include NON-CAR camping and free water. Be warned though that tickets at the gate are going to be $275, so there is definitely money to be saved in acting quickly! Car camping passes are about $85 after fees and what not, and while that's a pretty penny, I'll gladly pay it for the convienence of having my vehicle with me and readily accessible. Click here for the ticket options.