12 Performances You Have to See at EDC Las Vegas
Advertisement 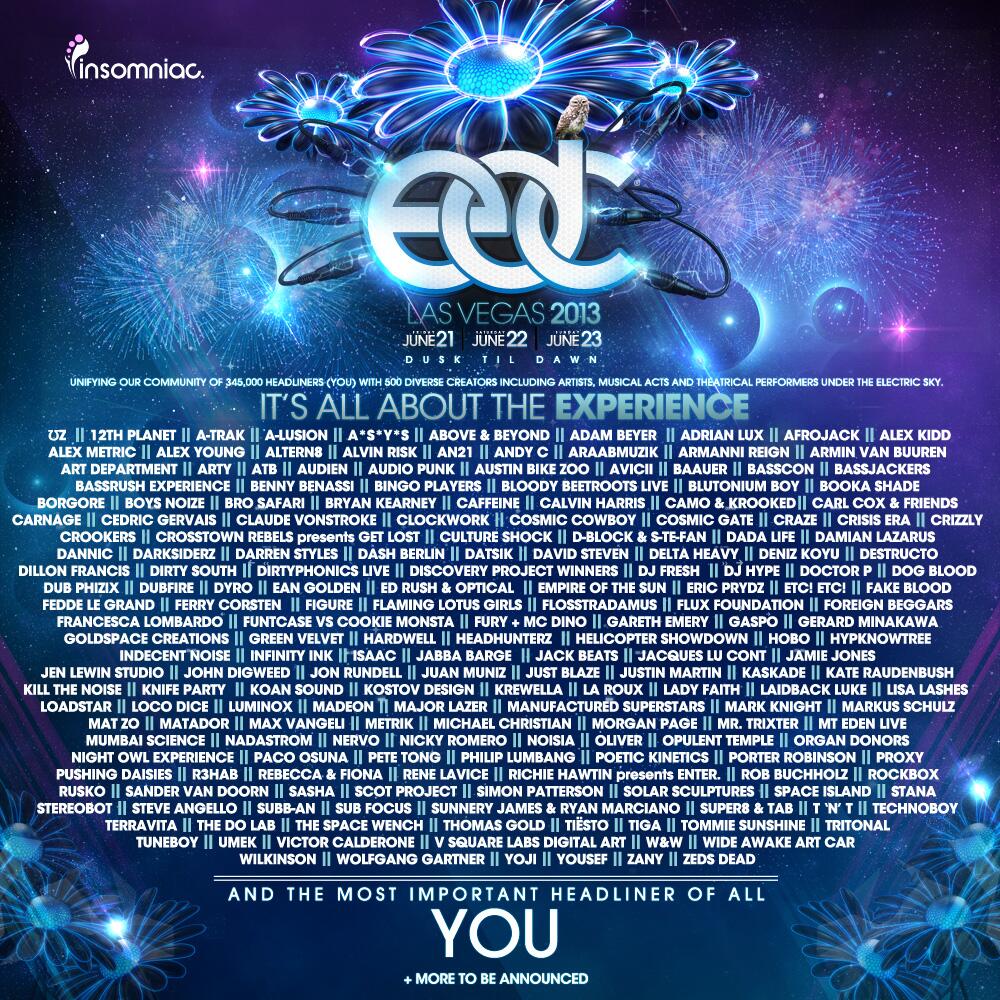 Glitch Hop, Dubstep, Drum N Bass. Starting off this list with a trio of Americans from the west coast: The hype is still spinning around their album release of “Love Death Immortality” earlier this year and an energized night-set at Coachella. Scheduled to play on Friday at EDC, The Glitch Mob brings the perfect level of cool energy to start off an incredible weekend. Really excited to hear some of their new material coupled with popular remixes of Daft Punk, Linkin Park, The Prodigy, or The White Stripes.

Techno, Deep House. In 1991, Green Velvet (aka Cajmere) released “Underground Goodies Vol. I”. More than 20 years later, he's still playing internationally at the world's most prestigious clubs and biggest festivals. Prepare yourself for a blend of '80s disco and '90s hard house. Whether you're new to the scene, or a festival veteran, you can't afford to miss this classic, once-in-a-lifetime, legendary set.

Electro, Dubstep, Drumstep. We're at the dawn of Knife Party's debut studio album: “Abandon Ship”, and it's become a likely reality that the Australian duo of Rob Swire & Gareth McGrillen will use EDC as a platform to test of loads of new material. Under normal circumstances, Knife Party is an act not to miss, but this year we know that they're set will exceed any existing expectations. If not for any other reasons, you have to be at this set to headbang to whatever crazy-new version of Rage Valley and Bonfire the guys drop this year.

Psy Trance, Dubstep, Glitch Hop. The third EP in the “Army of Mushrooms” series is scheduled to be released on Tuesday, June 17th. The Israeli group is going to continue to shatter genre boundaries and spin a complicated mix of dubstep, glitch hop, trap, and the psy trance sound that they pioneered in the '90s. ALSO, in case you were wondering, Duvdevani (the bald one) confirmed the group's first studio album since 2012; set to be released at the end of this year, and will be reaching back to Infected's trippy-chillout roots, similar to 2003's “Converting Vegetarians”. I'll be at this set on Saturday, no matter what.

One of the originals. Paul Oakenfold is still DJing, 35 years after his career started playing Soul music in London, England. Most of us are familiar with his “Perfecto” record label, started in the 1980s, or his movie soundtrack work; specifically producing the entire soundtrack for “Swordfish”. If you've never seen Paul spin, there'd be no greater venue than EDC Las Vegas to have your first experience with the legendary house/progressive/electro DJ who has been making dance music for longer than most of us have been alive.

Deep House, Techno, Chill. Marc Kinchen (or just, “MK”) is one of the world's most up-and-coming deep house producers. His remixes of Lana Del Rey, Wankelmut, Nile Rodgers, Sub Focus, and Storm Queen have made MK a household name. Alongside acts like Maya Jane Coles and Claud Vonstroke, MK is going to deliver an Ibiza feel to the world of EDC Las Vegas. If you need a moment to relax away from the hype and enjoy the moment, look to journey through MK's set on Saturday night.

Hardcore, Hardstyle. Angerfist – the godfathers of hardcore – have been promoting whiplash in the world of dance music for more than a decade. Known for wearing horror-movie-like hockey masks on stage, the group isn't afraid to kick the up tempo north of 200 BPM. This is a rare U.S. festival performance by guys who normally stick to the underground scene in America. If you have some excess energy to burn on Sunday night, there's nothing better than an ultra-powerful, mosh-pit inducing Angerfist set.

Trance, Progressive, House. Above & Beyond are just simply some of the best at WOWing a festival crowd. They pull you in, and take you on an emotional roller coaster from start to finish. They have an arsenal of trance and deep house favorites released on both their Anjunabeats and Anjunadeep Record Labels. Their complicated trance ballads combined with the unique experience communicating with the crowd (typing messages on the big-screen) make Jono, Tony, and Paavo a can't miss act at EDC Las Vegas 2014.

Techno, Dubstep, Hip-Hop. If you aren't familiar with the name Skream you might be following his partner in crime; Benga. In addition to DJ Artwork, Skream and Benga make up the trio called Magnetic Man whose 2010, self-titled debut album breached the top-5 on UK charts. Skream doesn't make this list because of his crazy energy or over-the-top set design, but because he brings something different to the decks at EDC. He has the ability to effectively mix hip-hop, techno, dubstep, and nu disco together into one, organized DJ set.

Dubstep, Trap, Moombahton. Known for his funny YouTube videos and off-stage antics, Dillon Francis also puts on a hell of a show. Having just seen him play at Mysteryland U.S.A., to say I was impressed is putting it mildly. Francis' personality comes out in his performance. Expect a high-strung set loaded with unreleased remixes and hard hitting drops.

Drum N Bass, Dubstep, House. There aren't many young producers in the business today who have generated the reputation that Netsky has. Expect him to warp a combination of up-tempo drum n bass and electro/progressive under the Electric Sky. Definitely a must-see for the creative-minded fan who's looking for something out of the ordinary and unexpected.

Progressive, Electro, House. The remaining two-thirds of Swedish House Mafia made their debut performance last weekend at Governors Ball, NYC. During the set, Axwell & Ingrosso tried something a little different. They turned on the stage microphones and had the crowd cheer as loud as they could. Ingrosso recorded the cheer into a 128 BPM loop, and then dropped a Synth over it. Slowly but surely, the duo turned the crowd into an electro-big-room anthem that made fans feel like they were part of the set. Definitely looking forward to this experience again at a larger scale.

Yeah… That guy. That guy who's headlined every U.S. festival since 2001; that you've probably seen 25 times since EDC last year. Tiesto continues to be at the front lines of the dance music scene in the United States and around the world. What makes this set special, is that it's coming 4 days after the release of his studio album “A Town Called Paradise” which happens to be referring to Las Vegas as The Town Called Paradise. Have to assume that this will be a special set for both Tiesto and fans who will get another chance to dance to his music under the Electric Sky.