Neuroscience, Music and Influence on the Brain by Moby
Advertisement 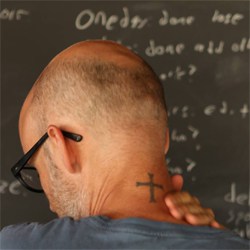 Last month at Bethel Wood’s Ceremony Field; the location of Woodstock ’69, Mysteryland U.S.A. hosted a unique, non-musical function, conducted by DJ legend, Moby. Late Sunday after he talked about how music can be used outside of the festival setting. He kept the audience utterly captivated, while adding his own sense of humor to the lecture.

Moby kicked off his talk by mentioning Creedence Clearwater Revival as a massive influence on his own musical tastes. He emphasized that nobody will ever need convincing that “music [is] powerful… You’ll listen to your favorite song and it would make you have sex, or cry, or dance, or drive across country, or go to England and take a picture of the recording studio where the song was made… It’s a strange art form where they play it at funerals, and they play it at weddings, and they play it at births… You listen to music to cry, you listen to music to laugh. They play it for military, when armies are marching into war.”

For most of his career, Moby believed that Music was simply extrinsically enjoyable. The idea that there might be a more practical application seemed nonsensical. Until the 21st century, the idea of Music Therapy had only been used anecdotally: Therapists realized that music made people happy. When someone was recovering from a physical or emotional trauma, uplifting music was a natural asset in treatment. Nobody ever thought to study the blood work or clinical effect of the music therapy. In 2007, Dr. Oliver Sacks authored a book called Musicophilia, which analyzed music and started to study its effect on the brain and the body: “It decreases stress hormones; epinephrine, norepinephrine, cortisol – it increases dopamine, it basically strengthens your immune system.”

Dr. Sacks began using music as treatment for individuals who suffered severe brain trauma. Music therapy, actually, allowed people to regain the ability to speak, and walk. “If you’ve lost part of your speech center, you can no longer speak. But if you play someone’s favorite song from when they’re 12 years old, even if they’ve lost the ability to speak they can still sing.”

The biggest roadblock in clinical musical therapy is lack of funding. Unfortunately, big pharmaceutical companies aren’t going to make millions of dollars when someone figures out that music is an effective treatment for Alzheimer’s. “There’s no profit to be made… it’s music, it’s free, thanks to the nice people at Spotify”

Moby concludes his lecture by saying: “My dedication feels so much more powerful… Music, which I thought was fun and frivolous, was actually a remarkably powerful healing tool. So suddenly making music, listening to music, being around music. These are not just foreign, stupid, frivolous things. It’s not like… spending time on facebook seeing someone you went to high school with just ordered a pumpkin spice latte at the mall. That’s pointless. But listening to music, and being around, is such a remarkable force for healing.” I’d urge everyone to take 15 minutes to listen to his words of wisdom; they might change your perspective on our entire musical world.