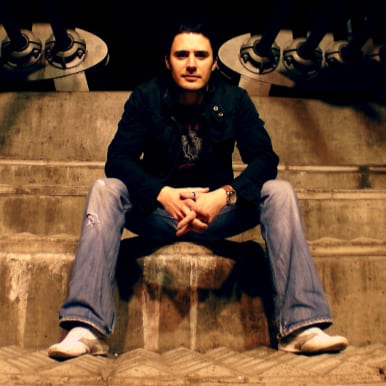 Ever since starting his career back in 2004, Dale Corderoy, or Corderoy as the world knows him, has been one of the most exciting names coming out of London’s EDM scene! His productions have been described as “fresh and innovative” by some of the biggest names in electronic music as he combines elements of House and Trance and gives them a Rock twist. Now, Corderoy aims to stake his claim in dance music and filter his music into the ears of the masses.

His latest LP, CDRY002, which includes ‘Open Your Eyes’ and ‘No Choice,’ was just released and 2014 is already shaping up to be a huge year for Corderoy, who’s constantly at work towards delivering new music to the world and has come up with new ways to deliver it!

“Aside from new Corderoy releases and remixes over the next couple of months, we're going to be launching a new Outpost Podcast along with another installment of the Outpost Mix Tapes. I’ll be taking things on the road a lot more too. I’ve been focused on producing and studio work the last few months, but the time is right to start taking things up a gear and begin touring with the new sounds.”

“I’m presently experimenting with pushing the boundaries a bit and I’m keen to unleash these on the scene. I don’t want to give too much away but next up is a track called ‘Dark Disco’ which twists up your imagination with its dirty and edgy vibe, followed by some big summer records and some exclusive remixes, one being a massive house tune from Mason a few years back.”

Extremely versatile and always raising the bar when it comes to creativity, Corderoy stays unrestricted when it comes to genres to form his own unique sound. His recent production for Perfecto Records, the red hot single known as ‘Kerosene’ was co-written with members of the Rock-Trance act known as Dogzilla and the Indie band, Belasco.

“I’ve known Richard Kayvan (who was one half of Dogzilla) for quite a few years now and we decided to work together on a number of projects. During that time he introduced me to Tim Brownlow from Belasco. We all hit it off and found we all worked well as a collective. Kerosene is just one of many interesting projects we’re working on and I’m excited to present these soon!”

His experimentation in music, as well as the love and passion he puts into work, has drawn notice from some of the biggest names in EDM, including Paul Oakenfold, who has so much love for ‘Kerosene’ that he asked Corderoy to remix one of his greatest hits, ‘Ready Steady Go.’

“I was incredibly honored and proud to be asked to remix one of Paul’s most iconic records. His support on what I’ve been doing recently has been nothing short of amazing.”

Amazing  indeed. The love and passion that Corderoy puts into his music is nothing short of amazing, and has been evident since he was a young child. Having such a broad in music from an early age has helped him stay unrestricted in his musical production and has allowed him to draw inspiration from multiple genres of music.

”Even when I was a child I always wanted to be involved with music in some shape or form. I think what keeps me evolving musically is down to my music tastes being really quite varied. At an early age I was exposed to so many different genres and styles, and it really helped to open my mind to new sounds. Back then things were slightly limited due to it all being in physical format. I often spent hundreds of pounds (English currency) buying LPs just on the chance they might be good. Nowadays I’m a massive fan of modern technology, like Spotify, where you can stumble across some of the most amazing music both old and new. I’d sit there listening to music all day if I didn’t have to do anything else haha!”

His experience hasn’t been exclusive to dance music. Corderoy has also been a major player in doing loads of sound production for films with BBC and IMAX.

“A couple of highlights would have to be working with Ewan McGregor and then most recently James May, lovely guys and both have very different styles but are equally really talented individuals.”

The thought process of producing a musical score is different when you have to take into account how it has to blend together with the visuals in order to complement each other. You may need to explore new sounds and genres of music you would have never given a second thought about, but this experience has been vital in helping Corderoy in developing his own unique sound.

“It can be different when writing music scores to visuals, you sort of need to have a different producing stance due to the material you’re working on being rather quite varied. Often you have to write and compose in a number of genres and apply different techniques to get the right results. It can be a real challenge sometimes but you get to experiment with lots of new ideas and these can often lead you into areas of sound you wouldn’t of normally of ventured. It can be quite hard work composing in styles you’re not that familiar with but when you come out with a result you’re really happy with it and it can be very rewarding!”

With all of his experience, writing musical scores for BBC and creating dance music, Corderoy is hard at work!

Corderoy has one last message to all his fans and readers out there!

“I would like to express my huge thanks for all the support and belief in me this transitional past year, 2014 is going to be big and bloody busy!”

EDM Sauce will definitely be on the looking out for Corderoy and following him very closely! With such high expectations he has for 2014, we’re sure it’s going to be his best yet!

Corderoy – Open Up Your Eyes