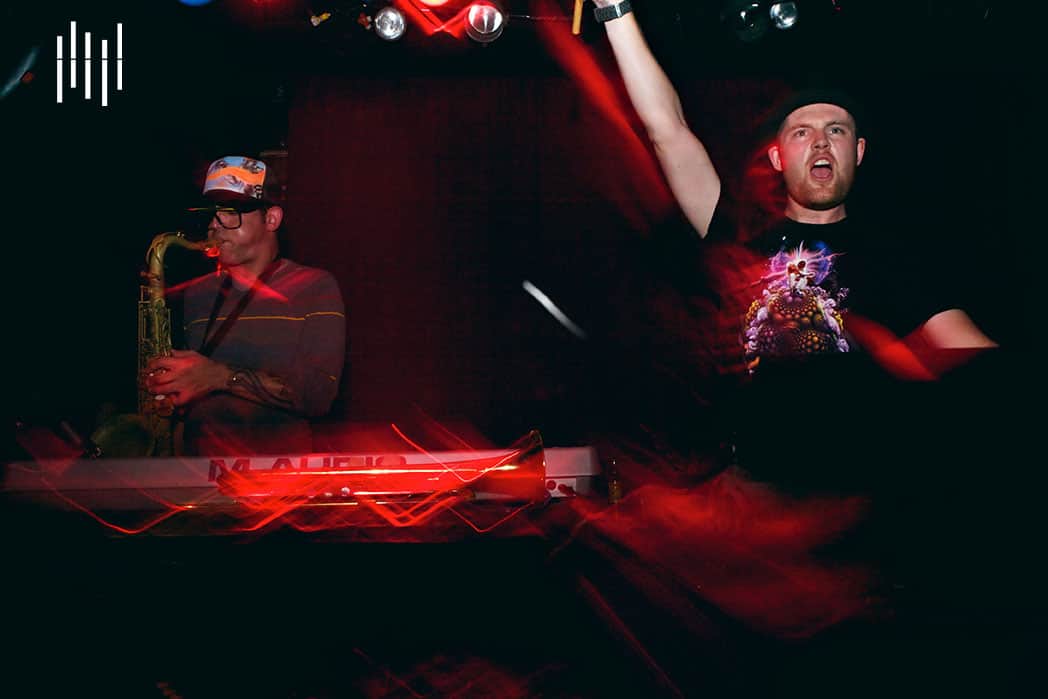 Four years ago at Shambala Music Festival in Canada, Oscar (Opiuo) met Russ Liquid and the rest is history. They've been making killer tunes together ever since and playing shows like last night, where they rocked King King Hollywood presented by the Do Lab with Soulular and GRiDWORK.

We had the opportunity to sit down with the guys after sound check and we're excited to share their thoughts and updates on future production and all things music. Special thanks to Jason James and the Do Lab for coordinating this meeting.

EDM Sauce: First, what are you guys working on right now? What's happening? Plug yourselves.

Russ: Now we're doing our own thing and planning for our 2015 takeover. Currently right now I'm touring with Gramatik and pushing my own Russ Liquid thing.

Opiuo: He's got a new album that's nearly finished and it's awesome.

Russ: We've got some New Music that's being birthed together as we speak and hopefully next year.

Opiuo: We're gonna do like a release together. We've done random tracks along the way and it's always worked out fucking awesome. So we're gonna do it like proper… a release. I'm in the middle of a five-month album (“Meraki” – available here) tour right now. Another two and a half months to go… and here, in Europe and stuff, and then home. Then make more music.

EDM Sauce: So you guys just did a song on your album, I love it. You came up with some awesome names for tracks (on the album), how do you come up with that?

Russ: There's a word for that… when the word sounds like the thing it is.

Opiuo: It's not directly but somehow it should conjure up something in your brain what the music's like.

EDM Sauce: This album. It's incredible to me as well that you fundraised everything for it online.

EDM Sauce: Did you accomplish everything you had on that list? (FULL CAMPAIGN PLEDGE HERE)

Opiuo: I did man.

EDM Sauce: That's incredible to me.

Opiuo: It's absolutely insane. I can't believe it.

EDM Sauce: Are you partying with random people?

Opiuo: Oh no, that one didn't come through. I didn't think that one would have come through but if that had I probably would have had someone's name tatted somewhere on my body and gotten probably fucked up for a whole weekend and can't remember anything, who knows what would have happened (lots of laughter). But no, everything else happened on it, dude. I was blown away.

Opiuo: It's an adventure, too. Because the aftermath of it has been getting everything together and doing it… and it's real time. It's good and bad for people to realize it. I haven't got a whole label behind me now getting everything done, it's just me and my management getting the vinyl done, getting all the stuff made. So once we finished everything, it's been a big learning curve and you learn how it works. It's funny because you can raise all this money, but zero of the money goes in my own pocket. It's all going into remixes or videos or posting and producing the product…which I think is good because instead of having to front…and everyone feels like they are involved because they are…without them it wouldn't happen.

EDM Sauce: Let's do you, Russ.

EDM Sauce: It's such a great thing for this scene to have a guy playing sax, flute, trumpet, piano, bass, trombone, clarinet… Where do you see that jazzy influence going? What do you work on?

Russ: I think everything in the universe can be described by sign waves. When the electronic music movement happened, the pendulum swung really hard to that one side where everything was just electronic. I think the live music world got neglected as far as that. I feel like the pendulum is swinging back and that's an exciting time for me because that's my whole thing…bridging the gap of the two worlds…old world and new world.

Opiuo: People resonate with real instruments, too. More than anything, it's part of your voice, it's an instrument. It's in you. Engrained.

Russ: It's like when you hear bagpipes and you're Scottish. You just start crying, grab your heart like “I feel so patriotic.” I see it going and continuing where it is. For example, Big Gigantic playing at Coachella with a marching band. I saw a video of it, the whole idea of it, going to a high school and getting a marching band. It's reclaiming playing instruments again as part of a thing that's relevant to the young. That ‘s awesome and that's the direction we're going. I hope that continues and I feel like I'm definitely a part of that movement.

EDM Sauce: Absolutely. I read something cool earlier that you got on Garage Band at an Apple Store when you got started?

Russ: Where did you hear that? I swear I only tell like my closest people.

Opiuo: I didn't even know that.

Russ: Oh yeah, I was working on cruise ships and I got injured and was gimped out, in and out of a hospital in Miami, Florida for a while. I would go to the Apple store and make beats on the Garage Band for a couple hours and then record… onto my mini-disc recorder. Mini disc! Look it up kids.

EDM Sauce: So did you do some of that and learned different instruments as you went on or have you always had an interest in all different kinds of music? Did it just evolve?

Russ: Actually when I was doing that, I didn't even know that people were making electronic music or even heard (of it) or whatever. I went back home and played in big bands for a couple more years, touring. But when I found out about electronic music, I was like, that is awesome. The logistics of touring and trying to be a band in a world that's not supporting that. For the average touring band, the grassroots style…they're still making pretty much the same kind of money that bands were making in the late 80's. Obviously the cost of living and getting around is way more than that. So it's really, really difficult.

So that's why I got into electronic music, being burned out on that world. But then once I got into it I was like, there's so much potential. I got this master plan, I want to reintroduce live music to this art form… and you know electronic music really got its start…

Opiuo: When I was growing up, like ten, twelve years old… the first electronic music I heard in New Zealand going. It was like trance.

Russ: To me, the first electronic music I ever heard was house music and that has its roots in jazz and R&B and all that kind of stuff.

Opiuo: Early electronic music was like as hypnotic and repetitive as the early days of native percussion music.

Russ: The first electronic music, though, was super psychedelic and weird. No beat. Just like a mix of… doing weird stuff. Did you know Neil Young did a techno album? It was right around the same time synthesizers came out. You should check it out. I just heard it for the first time last night. It's pretty awesome.

EDM Sauce: Final question. What's it like touring with each other?

Opiuo: It's good having another weirdo around.

Advertisement. Scroll to continue reading.
In this article:OPIUO, Russ Liquid, the do lab