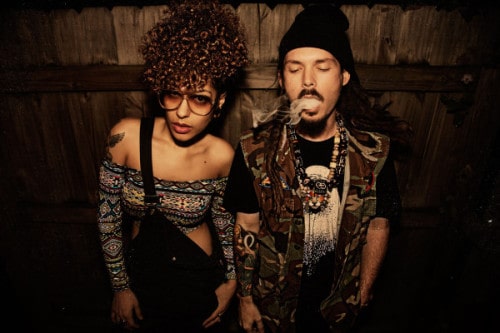 Though it's always fun to make music that grabs the listener with sheer force and vigor, it takes a special incline for musicians to avoid the main roads of electronic music styles and blaze a trail of their own in order to make music that grabs the listener with dynamic uniqueness. Perhaps that's why the enigmatic genre of trip-hop isn't a community filled with droves of producers, but for those that feel compelled to cast aside the EDM cookbooks and experiment, they can call the secluded genre a proper home.

After finding an obscured demo tape attached to the back of a science fiction novel, Astrea Corp, the moniker of the husband and wife duo Mike and Carly Astrea, would become inspired to begin their musical sojourn into the vast and amorphous world of trip-hop. Having released a couple EPs earlier this year, they're gearing up for the release of their next EP, Paradise Oscine, and EDM Sauce is able to premiere one of the seven tracks from that EP, entitled “Pink Flloyd.”

Starting off with fits of rhythmic glitch, the delayed and staccato lead Synth fades in and takes center-stage as ambient pads ebb and flow from the peripheral. Carly Astrea's vocals soon enter the fold, bearing a soulful aesthetic akin to the vocals found in Pretty Lights' songs. At the break halfway through, Carly's vocals continue as the acoustic guitar melody takes the reins, but after a bit of teasing, all previous melodies return to permeate at the crest of the song, concocting an intricate and full-bodied experience.

Paradise Oscine will be released next Tuesday, June 10th. You can pre-order the EP now on Astrea Corp's Bandcamp page.