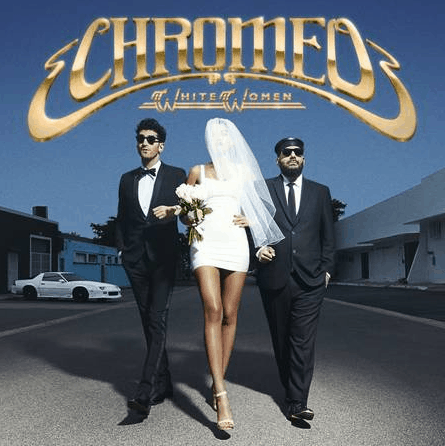 Chromeo released White Women, their 4th LP, earlier this week and ‘Come Alive!' Inspired by German-Australian photographer Helmut Newton, Chromeo named their album after one of his early books, saying it was “ballsy, funny, and was going to get people thinking.”

Always blurring the lines between retro and current music, the electro-funk duo of Dave 1 and P-Thugg stay true to their roots, making you want to groove and dance in your seat, yet appealing to the pop side of the music industry as well, as we hear in ‘Jealous (I Ain't With it).' White Women sinks its hooks into you and keeps you entertained and listening to the entire album. With groovy beats, awesome guitar riffs, and poetic melodies, the flow of White Women takes you on a journey through upbeat, fast tempo songs to slower tempo ballad-like songs such as the appropriately named ‘Ezra's Interlude' which features Ezra Koenig from Vampire Weekend.

Chromeo features artists Toro Y Moi and Solange Knowles in their songs ‘Come Alive' and ‘Lost On The Way Home' respectively, working with other artists, yet still keeping it their album as it doesn't feel like there are too many guests. Who knows what's next for the ‘Night By Night' superstars, but we'll be waiting! White Women came out May 12, so if you haven't heard it yet, you're missing out! Give it a listen and let us know what you think in the comments below!