Showtek Hopes To One Day Collaborate With Calvin Harris
Advertisement 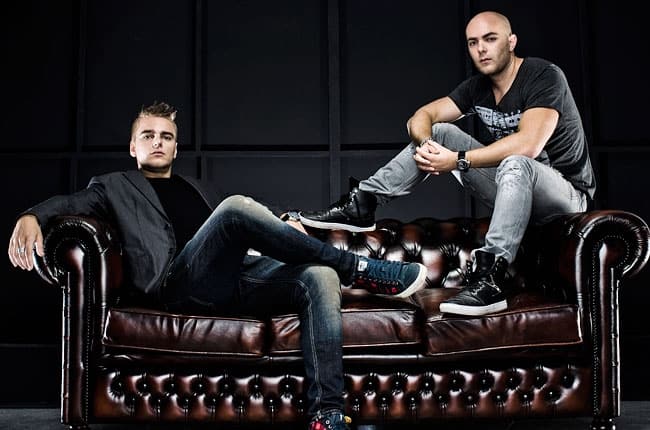 We have a special interview for you with the one and only, Showtek. These Netherlands superstars have been blasting sound waves with their creative tracks that everyone knows and loves for a while now. So if you want to hear their two new songs, ever wondered what the Janssen brothers were like as kids, where Showtek came from, who they want to work with, and much more,keep on reading. Enjoy!

First off, I wanted to give fans an idea of how you guys were before you became Showtek. What were the Janssen brothers like while growing up in Eindhoven? What brought you both to Djing and producing together instead of individually?

Eindhoven is the city of light. That's how it's called, cause it's the city where Philips comes from. It's a very inspiring and creative city, totally different than Amsterdam for example. When we were like 15 we went out to bars and clubs and fell in love with dance music really fast. It's been on Dutch radio since the 90's but to experience it in person that's something else. We also went to raves and festivals and partied till like 7 in the morning. In the meanwhile we were making our own music, very basic; Wouter knew how to play piano and was composing his own tunes and Sjoerd was the guy who knew how to make and mix music on a computer.

As brothers you have a strong bonding because of being family. And working with family can be very easy, because there's a certain trust. On the other hand, most of our friends have brothers too and they can't even think about being in the same room together for 24 hours, so we realize that this is pretty unique.

Where did the name Showtek come from? I know that it originated by you guys listening to techno, is there more behind the name?

Showtek comes from the TEKno, the music style we started producing first! Show are just the characters from our names; SJ from Sjoerd and OW from Wouter, so it was Sjowtek in the beginning but it sounded a bit Russian; we changed it into Showtek! Which worked out very well! Think every artist dreams off evolving! We just grew over the years; as persons and as producers.

Which artists have inspired you in the past? Who are you inspired by currently that you would love to work with?

Hard to mention just one, we got hooked on the Dutch and Belgium sounds when we were 14/15 years old . It had something fresh and cool. Also the German DJ Gary D. released mix compilations every few months with a great mix of techno, trance and hard dance. The tracks on those compilations definitely inspired us to make music as well.
An artist that we would like to work with in the future is vocalists like John Newman, Chris Martin and producer Calvin Harris.

This might be like choosing your favorite child, but which of your tracks means the most to you?

With Booyah we showed the world what we were capable of. The song is really different than any other song out now that's why it's so outstanding and the reaction from the crowd when we play it is just BOOYAH!!!
We remember the first time showing it to our friends; they were like.. WTF IS THIS!!! ITS GREAT!! haha.. and when we were with David Guetta is his studio in Ibiza, he literary fell of his chair and said like; OH MY GOD!!! This is some new stuff! This will be a hit!! We couldn't stop laughing cause of his French English Accent, amazing!! Calvin Harris and Guetta were the first to play it and they both gave it to BBC1 and told them; this is gonna be huge! So we got support from the start and it all went natural! Couldn't be better!

How do you think your sound has changed over the years?

We travelled the world for so long, we got influenced by so many things. We've been working with other artists like Tiesto and Marcel Woods, we co-produced lots of other songs that we build up this foundation of musical knowledge and we would be stupid if we wouldn't use it. When we co-produced Maximal Crazy with Tiesto, it was our eye opener. We were with Tijs at EDC Las Vegas 2011 and we saw what happened when he played that song and we just knew this was gonna be us in the future. We felt we needed to re-invent our sound, we already did but we never put our name on top of the tracks we co-produced. So we created a plan to switch sounds from hard dance to electro, cause we were cheating on our selfs. We were loving the New Music we were making in the studio and we were struggling with the old sound and the way it was evolving. It became so hard and we really lost touch with it. We knew if we would create a Showtek 2.0 sound, with a lot of Showtek influences from the past but with a new fresh touch we could rule the world haha. We already reached the top in what we did; there was no more to reach. But as an artist you want to express your self and if we feel we need to change a bit to be relevant we need to do it! So we collaborated with other artists like Tiesto & Hardwell to put our name as fast as possible in a new market and we came out with 6 very strong releases.

How do you guys prepare yourselves for a set? Does it change whether you're in the U.S. vs other countries? Do you feel like you can freely play with genres during a set?

Actually it’s not really that different when it comes to the preparation of the set. Since we’ve now been in the US for a couple of times we know what works best and how most of the kids react on our own tracks and from colleague producers. But normally, no, we don’t adjust our set that much to a certain country.

You guys are lined up for some great events, Amsterdam, Ibiza, Singapore, and Scottsdale in May, they are all exciting but which places are you looking forward to the most? Any favorite cities or places?

We always love to play for our people in Eindhoven!

You were amazing at Tomorrowland last year, how was that experience different from other festivals? Any chance TomorrowWorld is on your schedule this year?

It’s one of the most amazing festivals in the world, we love dit!!! And we definitely hope to play for them again this year!

What can fans expect for the rest of the year from you two? Are there new tracks on the horizon or are you focusing on touring?

Both! Of course right now we have 2 new tunes out in stores; ‘Bouncer’ & ‘Bad’, which are doing very well. Especially our collab with David is reaching all the corners of the planet right now and that’s really great to see. We have some weeks blocked for studio time till October, but there is also something like a social life that fulfils a lot of that time.

I hope you all have enjoyed this time with Showtek.  One of their big events when they come back in the states will be in Scottsdale. So, if you're in Scottsdale you're in luck! Showtek will be performing at Maya Day+Nightclub on May 25, thanks to Steve LeVine Entertaiment. And if you're not in Scottsdale, don't fret. This dynamic duo will be giving you tons of opportunities to dance with them.

Advertisement. Scroll to continue reading.
In this article:Showtek

Showtek Teams Up With Belinda and Nacho for ‘Una Mamacita’

Showtek is making their highly-anticipated return to the release radar with ‘Una Mamacita’, a new collaborative Latin-inspired track featuring the vocal talents of Belinda and Nacho. The new...