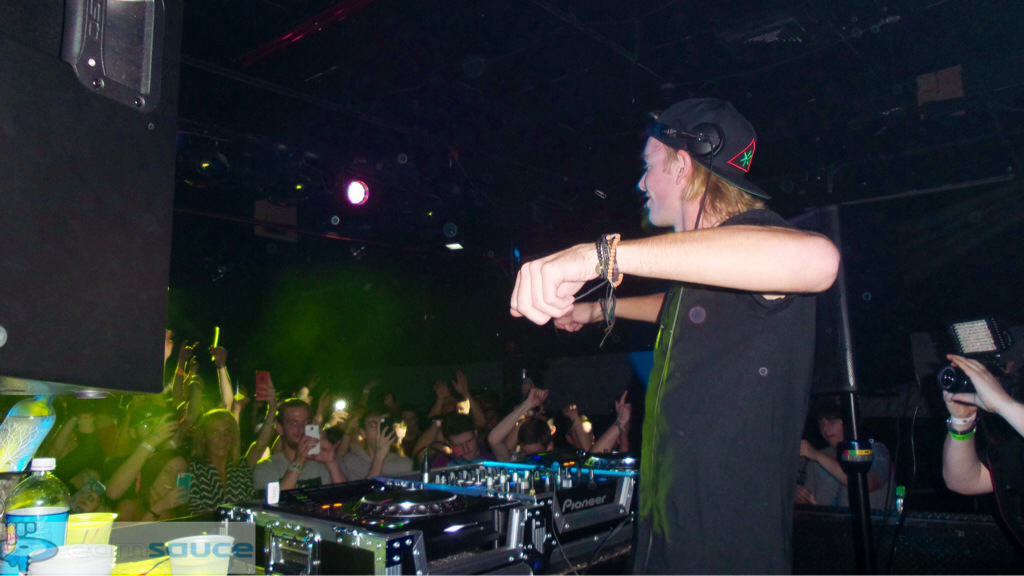 East Side Entertainment (ESE) brought the king of Melbourne Bounce to the city of brotherly love this past Thursday. Even though it was a week night, the party that ensued was of epic proportions. EDM Sauce was fortunate enough to not only be invited to be part of the Melbourne madness but also sit down and speak with Will about his plans for the upcoming year.

The night kicked off with a creative promotion. ESE held a meet and greet at the Philadelphia staple, Pat's King of Steaks. Will had his very first cheesesteak (which he could not say enough positive things about) and then hung out with his fans, answered questions and humbly took several photos with the excited crowd.

It [cheesesteak] was insane… I f*****g loved it so much, it was exactly what I hoped it to be and I couldn't have asked for any less or any more.

After the meet and greet wrapped up everyone headed over to the venue. District N9ne on 9th street in Philadelphia is a mid sized venue that delivers both an intimate rave experience as well as lighting and sound that one would expect from a giant concert hall. It is definitely one of the best venues in the city. The opening act, Night Sh!ft, took the stage at 10:30 and delivered an opening set of minimal, electro, and progressive house that got the crowd perfectly warmed up. Will took the stage at 11:30 and his signature Melbourne House quickly whipped the crowd into a frenzy. Will explained the Melbourne Bounce sound as one that is complex and full of different elements.

While it's still got those uplifting festival vibes, its definitely something new. It used to be very minimal, like techno, but now its got dutch house and aggressive elements as well. The main part is the kicking base, thats slightly off; the boppy side, the bounce. If you really wanna know what it is you gotta listen to it though.

Will demonstrated very early in his set why Melbourne Bounce is taking off in the United States. With his remixes of Martin Garrix's ‘Animals' and Robin Thicke's ‘Blurred Lines' the Aussie appealed to those in the crowd looking for a party just as much as the seasoned EDM veterans. His original material is just as impressive, if not more than his remixes. Songs like ‘Ah Yeah' and ‘Chemical Energy' are prime examples of why many people including Will himself believe Melbourne Bounce will overtake what Big Room is as the next big sound in EDM.

It definitely has the potential. With guys like TJR and Joel Fletcher bringing out the big, BIG bounce tracks it is getting engrossingly popular. I can definitely see it taking over, but of course only time will tell.

Will played quite a few unreleased tracks throughout the night, including one as his opener that created an astounding amount of energy in the crowd. Since the 20 year old is on the road constantly, producing has been difficult without a studio. He explained that while he tries his best to produce using Headphones on the road, the sound quality poses several challenges. Lucky for the crowd on Thursday night he got into a special studio a few days before that allowed him to play out some new tracks to the crowd.

Its hard man, It really hard. I will bounce out a track 20 to 30 times in the studio before playing it and then listen to it 20 to 30 more times before I am happy with it. Its especially hard since I am in headphones on the road at the moment. I got into a studio a few days ago, like a proper studio… actually Dr. Dre's studio, and it was crazy! I just could hear all these faults in it and I was like ‘oh my God'. But I was able to get the needed time and be done with it

Will Sparks has played massive festivals including TommorrowWorld and Future Music Festival. He has experience working crowds that range in the hundreds up to ones that range in the tens of thousands. In his performance at District N9ne Will demonstrated that he is able to take the energy of a set designed for a festival and funnel it into a crowd that is 100 times smaller. At points during his set the crowd reaction was so intense, it seemed like the venue was shaking harder than from the bass alone. Will had a few things to say about what its like playing a massive festival compared to an intimate club, though he was clear that each was special in its own right.

It's weird, like you can't really comprehend it or get your head around it. The feeling is insane. The first time you do it [play a festival], its just like ‘Oh my God', but you do it because while its insane, at the same time you are in your element, your home. I can never really comprehend what the feeling is, but it is what it is haha. Playing a small venue is a totally different vibe. But seeing the emotional response to your music on the crowds face in a intimate club is really special.

Ever since last year when ESE brought Will over to Philly for his first show ever in America, Sparks has been moving non stop, playing gigs all around the globe. Will reassures that Melbourne is always going to be his home, and has no plans to permanently relocate to the states yet. Even with all the travel, and explosive year he has had… it sounds like some of his biggest work is still yet to come.

I am only starting to get s**t out that I was making a year and a half ago. Its so annoying. I got a new collab with Joel Fletcher and another with Laidback Luke. I also got heaps of originals coming out soon, I can't even name them all, just thinking about them is going over my head. I just gotta get them out!

Will Sparks' incredible talent is only matched by his humility and his patience for his fans. East Side Entertainment created the perfect way to connect artists and fans in addition to putting on an incredible show. The entire night was a massive success all around and here at EDM Sauce we cannot wait to see who ESE brings to Philly next.

Advertisement. Scroll to continue reading.
In this article:District N9ne, Will Sparks