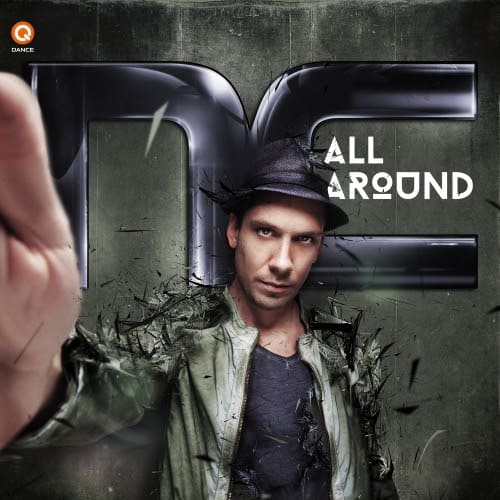 Bas, the mind behind Noisecontrollers, has had a busy quite the productive year so far. Not only has Bas released his first full artist album ‘All Around', but also completed a full North American tour promoting the EP. In between tour stops and studio time, Noisecontrollers was nice enough to find the time to sit down with us to discuss his new album, life on tour, and the direction hardstyle as a genre is taking.

It is obvious only a few songs into ‘All Around' that it is not your average hardstyle album. The name is an ode to the life of travel Bas has taken on as an ambassador of hardstyle, as well as his own person effort to push the boundaries of the hard dance genre.

I noticed many vocals contained the phrase all around. As I travel a lot to spread the Noisecontrollers sound it suited the album really well. Also within the boundaries of hardstyle I try to be as diverse as possible.

The album explores many different areas that tend to be neglected among many of the more common hardstyle releases. The album explores the more melodic and deeper side of sound design. Many of the songs employ lyrically intriguing vocals that given the listener a unique experience that is unmatched by any other recent hard dance release. While the album is no doubt unique to the genre, Bas explained that it was not his intention to stray away from the status quo. He believes planning only gets in the way of the creative process and enjoys allowing himself to improve naturally as an artist.

I never try to aim to be different [nor] try to be mainstream. Whatever gives me a good feeling at the moment is my guide. I don't like planning anyway. In the past I started tracks [intended] to become soft which turned out really raw. On the other hand I guard to be not repetitive and always want to improve the overall sound of my productions. That's also the reason I can't make any prediction what my music will sound like in the future.

What makes ‘All Around' such an incredible album is the fact that it pushes the boundaries of hardstyle while still remaining within the parameters of the genre. It is difficult to produce new sound design within the genre, as the beats per minute is so high, subtle changes are seldom noticed. Recently several top hard dance DJ's such as Headhunterz and Showtek have decided to leave the genre. Many believed this was because of the general direction hardstyle as a whole was taking, Bas assured us this was not the case.

I worked with them both in the studio and I can tell 100% sure their motivation was and is always passion for the music and following their heart. As a producer, I can tell it's not what you dislike that determines what you're going to produce but what you actually do like. In that way, I don't think the change of direction is pushing DJ/producers in general to stop making any type of genre. Producing good music requires a dedication that one can't bring up if he is not behind it.

Noisecontrollers has toured all around the world gathering experience and cultural influence to create ‘All Around'. Life as a touring DJ is difficult as it does not allow for a lot of free time for relaxation or production. While Bas enjoys both America and Europe equally in terms of crowds and venues, it is clear that touring closer to home has its advantages.

In Europe, I'm most of the time home during the week, spending time in the studio. In America, I was on the road for more than 3 weeks. Hotel rooms and flying daily and because of that seeing many new places. I totally loved it. Although I missed the studio sometimes I had such great experiences. The gigs, great people and beautiful places made it unforgettable. I can't wait to be back!

‘All Around' is 18 tracks of beautifully produced, unique hardstyle. The album comes at a crucial time and cross roads as with the departure of many big names from the genre, there is a fear among loyal fans that hardstyle might be heading in a negative direction. Noisecontrollers demonstrates that there is still much more to be explored in hard dance. ‘All Around' is not only a statement that Noisecontrollers is a force to be reckoned with, but also that hardstyle is as dynamic and alive as ever. The album is a labor of love from a man who lives and breaths music, a fact only reinforced by his answer to the question of, “If you could be one animal what would it be and why?”

Any kind of bird that can fly. Who wouldnt want to be that?! Oh and a bird that sings beautifully so I still can make some music.

In this article:All Around, Noisecontrollers