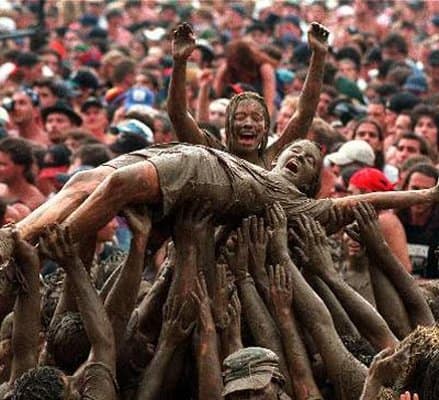 The Times Herald Record out of Hudson Valley New York has reported a possible mega festival in the works at Saurgerties NY. The last major event to be held at Saugerties was Woodstock '94, so needless to say that the ground has a history of epic proportions. EDM power house SFX and Michael Lang are working together to create the music festival to end all music festivals. In case you do not recognize the name, Michael Lang is one of the original creators of Woodstock '69. The festival is reported to be put on by MCP events, the company behind Counterpoint and Camp Bisco.

While Saugerties has already approved the event more steps need to be taken to allow the festival to become a reality. Applications were submitted to the county and state zoning board in December 2013 for a mass gathering permit, which allows a crowd of over 5000 people in a given area. The jury is still out on whether they will gain the approval of Ulster County and New York state.

“Documents show tickets would cost between $150 to $200, plus camping fees.

Plans show the concert would be a big one — hosting rock, electronic, indie and hip-hop music, with a maximum capacity of 30,000 people.

Tentatively, the show would be from July 10-13 and host 80 acts, 500 artists and include a roving force of more than 300 private security guards. Paramedics and EMTs also would be on site 24 hours a day, plans say. Drugs would be prohibited.

While the county sheriff assures that, “It is definitely not a sure thing yet.”, the Saugerities supervisor is very open to holding an event on the grounds and is working diligently with local and state governments. With recent line-up announcements of Mysteryland and EDC NY, we can only imagine the genre busting line-up that could be built with Woodstock creators and SFX combing forces. Stay tuned for any further developments.

In this article:Festival, Saugerties, SFX

Tampa's Sunset 2.0 Music Festival has officially released its phase 2 lineup, and it is absolutely epic. There are many great additions that will...

In 2019, the Powabunga Music and Mountain Festival burst on the scene and completely dominated the town of Vail for an unforgettable weekend featuring...