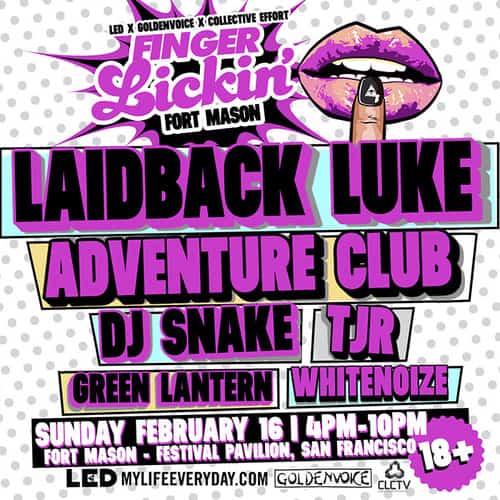 If you’re one of the lucky ones residing in the City by the Bay, you know just how an important of role music plays in San Francisco culture. No matter the time of year or day of week, there is ALWAYS a concert of some sort happening in the Bay Area, and not just one, but hundreds. And this coming weekend, Sunday, February 16th is no different. Taking place literally on the Bay in the very scenic Fort Mason Center, LED, Goldenvoice, and Collective Effort is bringing some of EDM’s top artists to San Francisco for a day of crazy dancing, out-of-control partying, and of course, amazing music.

Although Laidback Luke is the name that is catching everyone’s eye, the lineup is impressive from top to bottom, featuring artists of all kinds and genres, from local to world-renowned. Come on, it's a Sunday afternoon, you got nothing better to do anyway. Get up and cure your weekend hangover with some of today's hottest up and coming artists.

WhiteNoize
Believe me, last definitely does not mean least in the case of this Finger Lickin’ lineup. Based in San Francisco, the up and coming duo consisting of David Carvalho and Chris Harnett have been tearing up the West Coast, performing at largely acclaimed events such as Coachella, Beyond Wonderland, and Ultra Music Festival. Topping charts with their energetic House remixes and original tracks, WhiteNoize is most known for their fun, can’t-stop-moving live DJ sets, so make sure to show up on time, equipped with your best dancing shoes.

Green Lantern
Don’t forget to bring your twerk team, ladies. Also rounding out the lineup for Finger Lickin’ Fort Mason is Trap artist and hip-hop inspired musician DJ Green Lantern. Born and raised in Rochester, NY, James D’Agostino (aka DJ Green Lantern) first claimed his rise to fame after Eminem named him the Official DJ of Shady Records in early 2000s. Most known for his rap focused mixtapes, DJ Green Lantern is sure to bring the beats. Just because it’s a Sunday morning doesn’t mean the Bay won’t get down and dirty.

TJR
When TJ Rozdilsky, better known by stage name TJR, hits the stage, expect to turn up a notch. Recently featured on Diplo & Friends and topping beatport charts with the below banger ‘What’s Up Suckaz,’ TJR’s techno and hard-hitting house tracks will blow the roof off Fort Mason (um, and your minds).

DJ Snake
Like Pavlov’s dogs, the second we here ‘TURN DOWN FOR WHAT!’ blasting from our speakers in that Lil Jon voice we all hate to love, our temperature begins to rise, our head starts to bop, and a smile spreads across our face. We can’t stop or deny it, we love to party, and DJ Snake will get it started. Previously producing for stars such as Lady Gaga, Paris-based artist finally broke out onto the EDM scene with his own projects. Quickly climbing to the top of playlists and charts, DJ Snake is a name that will soon be selling out venues all over the world, if not already.

Adventure Club
And here come the womps. Canadian electric duo Christian Srigley and Leighton James, known as Adventure Club, will take the stage ready to drop some major bass. Associated with well-known pop electronic group Krewella, Adventure Club’s repertoire of bangers mixed with love songs mixed with hard dub, is a guaranteed recipe for an insane dance party with a side of belting out heart-felt lyrics to friends.

Laidback Luke
Not that his man needs much of an introduction. World-renowned headliner Laidback Luke is one of the top dance music remixers and artists in the industry. Recently taking voyage on the much anticipated Holy Ship!!! and soon-to-be proud father with wife DJ Gina Turner, Laidback Luke is no noob when it comes to bringing the house down. The electronic DJ is a master at mixing a wide range of EDM genres and songs and knows just what to play to get the crowd going.

Tickets are almost sold out! Don't miss out on this Finger Lickin' good time and buy your ticket now!!! See you there!!

As we eagerly await the arrival of Adventure Club’s forthcoming album, the Canadian duo offers another preview with the release of new single ‘Here.'...

World-class producers and champions of melodic bass Adventure Club return with another look into their forthcoming, untitled album. After 4 lead singles in 2020...