Giveaway: Enter to Win 2 GA Tickets to Nitti Gritti and Friends in Miami

VINYL GIVEAWAY: What So Not "Not All The Beautiful Things"

Calling All DJ's! Win A Chance To Open For Thomas Gold At Miami Music Week

Get Ready For Decadence Arizona With Exclusive Playlist + Ticket Giveaway 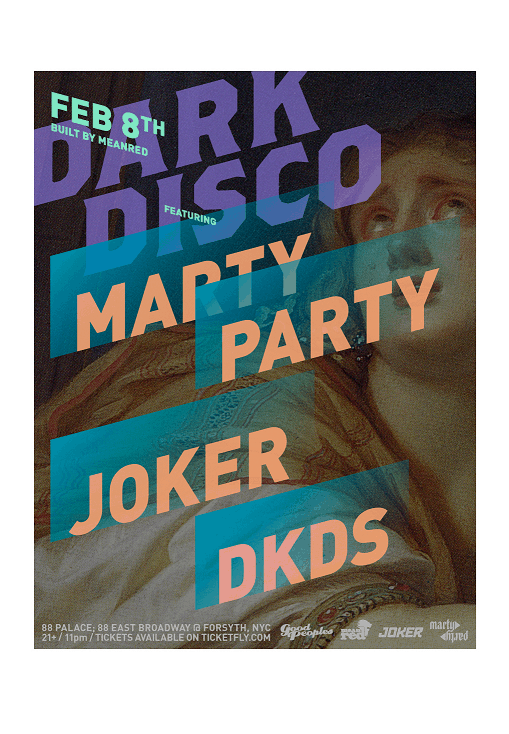 We are pleased to offer TWO pairs of tickets for this Saturday in NYC courtesy of MeanRed Productions to Dark Disco w/ MartyParty, Joker, and DKDS at 88 Palace.

MartyParty‘s irreverence is entirely irresistible. Born and raised in South Africa and currently residing in Miami, he travels the world to perform on festival stages and has audiences going off hard. He is decidedly not tied down to a definitive sound, instead choosing to forge ahead attached to nothing, creating everything with originality, and garnering fans all along. His productions pull from trap, dub step and dirty electronic, but are always experimental. His tracks include a narrative and range that is noteworthy and captivating. He performs without Headphones using only Ableton Live, so he’s right there with the audience in the middle of what will for sure be a raucous Dark Disco dance floor.

Even from way out in Chinatown we’ve noticed how Bristol is calling and Joker is bringing it hard this month. Creating innovative grime and dub step with US influences (like Dr. Dre) and incorporating bass bass bass, Joker has been on our list of hopefuls for a while now. Using vintage analogue synths mashed together with funked out beats, he creates a hard hitting sound. He says, “[b]ut really, my music is like Sega Mega Drive meets R&B meets grime with a little bit of dubstep thrown in and a funk twist.” We have no clue what that means as generally we are too busy lining up shots on dance floors to play video games, but underground NYC will be better for this brit BRINGING it to the Dim Sum Party House for this month’s edition of Dark Disco.

DKDSare two brooklyn Underground heroes whose back-to-back sets perfectly embody the Dark Disco vibe. In the Brooklyn techno and house scene, they can be seen playing every can’t-miss after-hours and club night, and they are the longstanding Dark Disco residents. These two cousins are the duo to keep your eye on as they bring the NYC underground scene to the rest of the world.

Jumping on this Disco train are NYC staples and party animals Tanner Caldwell and Max Mischief.

Dark Disco is an underground dance party in a strange Dim Sum Party house in the hallows of Chinatown in Manhattan. Residents DKDS kick out the jams with a fierceness as they are the consummate party starters, known for keeping a hard edge and a full dance floor. We’re committed to partying with a good sound system, lots of shots and a venue with dark corners, where you can love and hate equally and then drink and dance it off. Welcome to the party.

For contest details see below: