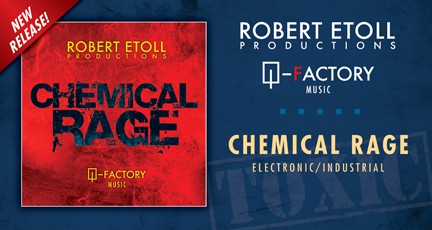 Q-Factory Music which is a division of Robert Etoll Productions specializes in licensing music for motion picture and television advertising. Etoll and his team has just released “Chemical Rage,” an “industrial, electronic, electro-rock style” creation that is geared towards Sci-Fi, Action, and Thriller movies. With roots in rock, Etoll's production team of Robert Etoll, Enrico Cacace, and co-composer Tim Kelly have put together ten heavy tracks that capture the hardstyle electronic scene of present and future, with a twist. The album is not for sale but the tracks can be streamed through the website (along with their other music) at this link:

This album is enticing enough based on track titles alone. For example, there's “Selenium Spasm,” “Arsenic Disorder,” “Boric Abuse,” and “Krypton Kraze” to name a few. Their previous album release electro-dubstep is equally compelling and intense. The dubstep is very epic, high energy, and heavy like Bassnectar, Skrillex, Borgore, Excision, Nero, or Atlanta's Must Die! and MK Ultra!. Other music from Etoll can be purchased on iTunes or online like their album “Final Reckoning” which was released through Big Fish Digital in 2012. Enjoy.

Take a listen to the montage of the album below.