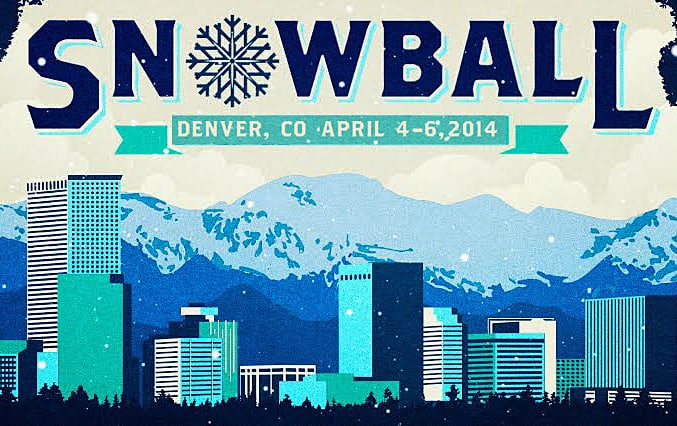 After a surprising change of events Snowball music festival will move out of the mountains of Colorado and directly into the the state's capital, Denver. Since the wonderful festival started in 2011 it has moved locations once already and this will be the second. The kick-off year and second year, 2012 were both held in Vail Valley, Colorado and attracted big names like Bassnectar, Pretty Lights, Big Gigantic, and Rusko. After the two years in Vail Valley the festival made its way to Winter Park, Colorado with performances from Pretty Lights, STS9, and Big Gigantic. It comes to many as a surprise that they will relocate to the city of Denver, it definitely takes some of the atmosphere people love out of the situation by not being buried in snow on the mountains with some of the most awesome people in the world. But it also is more appealing to some because how much more accessible the festival will be helping travel situations for many. Also their will be a great deal of after parties and countless options for living/staying in the heart of Denver. Snowball has always been directed towards the EDM fan base and will continue to do so in the upcoming year. Although the lineup is not yet announced it is rumored to have many similar artists performing, very exciting for all the EDM fans out there. It will take place from April 4th-6th at Sports Authority Park, same place where the Denver Broncos play their home games. Not sure if it will be in the actual stadium or just in the surrounding area but it will be a blast any way they put it on. From experience of going last year and having a tremendous time, I would recommend the festival to everyone out there. With such easier travel arrangements it really is a great option for anyone looking for a mid-year festival to go to. Hopefully see you in the snow! Nothing better then raging with your best friends in warm Clothes and not being dehydrated in 100 degree weather like most the summer festivals.