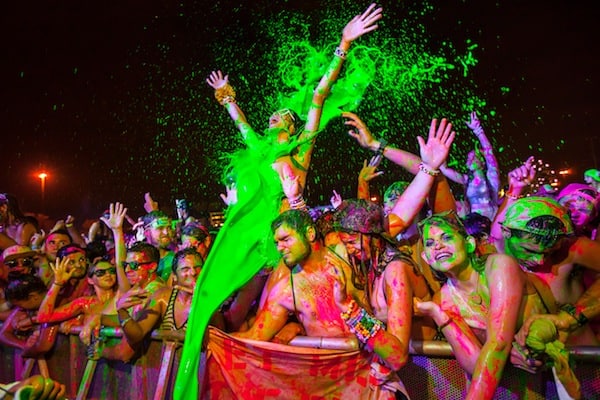 Remember as a child how much you used to love to paint? It was one of my favorite things to do, even if my tendency was to venture outside the lines. Well, much hans't changed. Outside the lines is still where I get my kick, and while I no longer paint, getting painted on doesn't seem so bad. That sounds naughtier than it actually is. Maybe…

Last weekend, at Life in Color's first festival, records were broken when 25,000 attendees jumped and begged to get splattered on the bright colors of the rainbow in paint. Don't worry, it's instantly washable. And fun.

Life in Color, formerly known as Dayglow, started off as a small-time college party in Tallahassee. Founders Paul Campbell, Sebastian Solano, and twins Patryk Traczand and Lukasz Tracz started throwing the damn things back when they attended FSU. I remember going to one at Chubby's (Tally's former warehouse/nightclub spot) and thinking this is going to catch on. It did just that. From 500 people to 14,000 (last year's Miami show attendance), and now 25,000, it's clear that paint isn't just for kids. Although they sure as hell seem to like it too.

As the first festival held in the Sun Life Arena, Life in Color posted up in the stadium's parking lot. Two massive stages and a smaller stage dedicated for local talent and dubbed Florida's Finest made up the festival. Fans also had the option of zip lining through the skies and catching view of the main stage madness, or taking it all in at a slower and perhaps more romantic fashion on the ferris wheel. A inflatable structure resembling the tentacles of an octopus gave a sea of fans a place to chill out and take a break from the paint. The production was on point and almost seamless, which is impressive given that they transitioned from their typical indoor venue to an open area. This actually agreed with the concept perfectly, and the sound was 10 times better than last years, which was held in the Miami Beach Convention Center. Another thing that was 10 times better? The lineup. From regulars R3hab, David Solano and Diplo, who were at last year's show and came back to be part of LIC history, to Major Lazor joining Diplo, ETC! ETC!, Brass Knuckles, Chuckie, superstars Calvin Harris and Steve Aoki, and the diverse 2 Chainz, who brought his something different to the EDM-centric event. He was our favorite, even if when he came on hard cold rain poured on the grounds of Sun Life Stadium. Oh well, it was a nice way to wash the paint away and make for a clean new canvas. We didn't even mind the fact that we had to rock out to the guy who started from the bottom and now he at the top of the stage in a porta potty. It was well worth it, and beat getting rained on. But then the rain calmed down and Calvin Harris brought his powerhouse sound, ensuring no one left cause of the weather. Major Lazer was where we were at the show's close. Why would we ever miss Diplo's bubble boy crowd surfing stunt? Congrats Life in Color. Maybe next year well meet you at #50,000.

What's going on dance music fans? Tonight we have a killer new remix to show off from the remix gods themselves – Los Padres....