The Most Popular EDM Artists According to Social Media
Advertisement 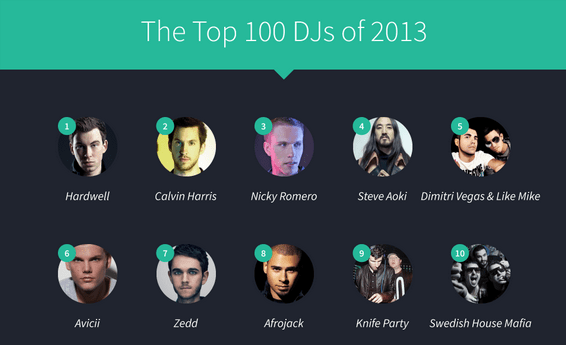 London based social media startup known as JustGo and ToppleTrack have just completed their infographic which displays The Top 100 DJs of 2013, By Data. JustGo said that “We looked at the Top 100 DJs by taking into account the number of Total Fans as well as New Fans acquired in 2013. While Total Fans is more reflective of a DJ’s overall popularity, New Fans – as we define it – is more reflective of current excitement. Therefore, we gave Total Fans a 2:1 weighting against New Fans or 60% for Total Fans versus 30% for New Fans.”

Take a look at the fascinating trends of EDM and DJs in the 2013 year.

How Many People Use Social Media?