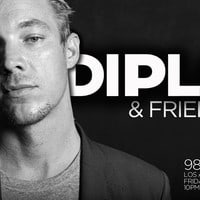 Diplo posted his usual Diplo & Friends Mix on BBC1 Extra today on Soundcloud, highlighting his favorite tracks to wrap up 2013. Track list is available and the set lasts just about 120 minutes (scroll below to play). See tweet below:

Diplo had a huge year in 2013 and New Years week was no exception. Major Lazer crew (Diplo, Jillionaire, Walshy Fire, dancers Mela Murder and Lafayette Bless) played their last show of 2013 in New York at Pier 94 on Monday night with the aid of none other than Lindsay Lohan. In this video from Instagram, Walshy Fire tries to take off Lindsay's snapback to get her more involved in the show but she remained low key. She is apparently soaking up tips on being a disc jockey according sources like TMZ.

Diplo wrapped up New Years Eve at OMFG festival in San Diego with two shows and then released his 2013 mix on Soundcloud today with his usual BBC1 Extra set. Enjoy:

In this article:Diplo, Diplo & Friends