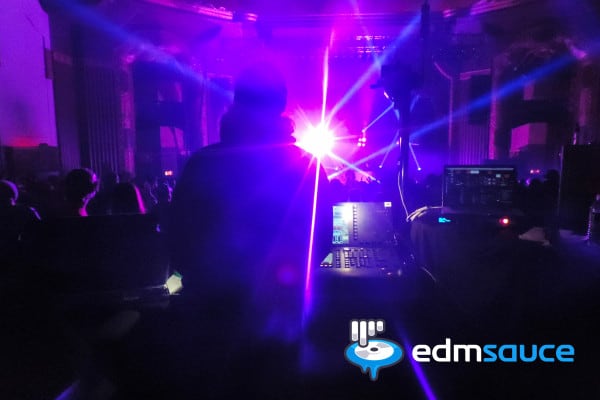 On Saturday, Gramatik, HeRobust, MuzzY, and Exmag took the stage at Royal Oak Theatre in Royal Oak, Michigan for a night that will not soon be forgotten. Lines formed quickly outside the music theatre as fans waited for the doors to be open. At 8 PM, their wait was over. After passing through a security checkpoint inside the doors, the crowd began to form in front of the stage anxiously waiting for the first artist to play.

As MuzzY started to play his first track, more and more fans and event goers flooded to the front of the stage. After getting the crowd on their feet and dancing, MuzzY continued bringing track after track. Unknown to some of his fans, he played a few tracks off of his new album that will release in the next few months. After talking with MuzzY backstage, he mentioned to us that he enjoys playing shows in his native city, Detroit.

From 9:15 PM to 10:15 PM we went backstage with MuzzY for a great interview which will be available soon!

HeRobust was definitely one of the most interesting artists to experience playing a set. During his set, he actively engaged with everyone inside Royal Oak, urging them to dance and even got every single person in sight to jump in sync with the music. His set was a combination of House and Trap style music that was perfect for the active crowd. HeRobust also had a Meet-and-Greet after the event was finished which can be seen later in this article.

Finishing up the event, Gramatik. A great medley of electro funk with live instuments was a perfect mix of soothing sounds and a great way to finish up. Gramaitik, eased the crowed while still capturing their attention with the unique sound he has.

After Hours Meet and greet with HeRobust

After the show, three lucky winners (and their +1's) had the opportunity to meet with HeRobust after the show to talk and just hang out! One lucky winner, Meg Natoriano, got to cross off a Kandi Proposal from HeRobust off of her bucket list! Congratulations to all of the winners as well as a special thank you to our friends at React Detroit, Motor City Art Machine, as well as MuzzY, HeRobust, Gramatik, and Exmag for a wonderful show!

Check out the rest of the photos from the event on our Facebook or view them on Flickr.