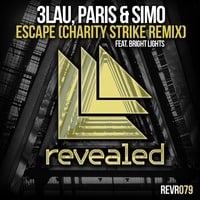 Charity Strike has contributed to the remix package of 3LAU, Paris & SIMO and Bright Lights with their hit track “Escape.” Los Angeles based Charity Strike has delivered an electro cut which is sure to remain a go-to-track for DJs for the foreseeable future.
Read our exclusive interview with Charity Strike below.

1.) Tell us a little bit about your background and how you got involved with making music.
Mike- I started playing guitar at the age of 6 and received formal training for the jazz concentration in my later teen years. I’ve also played with various bands of many different rock genres. In high school, I started composing music for the bands I was in using this really old-school PC midi software called TabIt. That’s when I really discovered the freedom of Music Production and later moved on to Ableton Live while I was attending UCSB, which is still my main DAW today.

Philip- When I was around 15, I had the pleasure of being introduced to the nightlife scene in Berlin. I have a lot of relatives in Germany and visit as often as possible to keep my roots tight. I was inspired by techno, and minimal house, I quickly grew a desire to create the music myself. Music and production became my main focus in life and I really began to develop my sound. Mike and I met in Santa Barbara, in the downtown DJ circuit, shortly before we moved to Los Angeles.

2.) We were lucky enough to sail on The Groove Cruise as well. How was your experience on the cruise?

Philip – It was pretty crazy, from silent discos to sunrise sets on the deck, it was really a great experience for us. That was our first cruise, so I don’t think we could imagine one any different (laughs).

3.) Tell us about your Beatport Remix Contests and how you ended up?
Mike – We have had some success with remix contests since we started entering them a little over a year ago. In August 2012, we won the Beatport remix contest for Sander Van Doorn’s ‘Chasin’’, which landed us our first release ever on Doorn Records. The ‘Escape’ remix was originally among the most recent batch of Beatport remix contests. Although we didn’t receive the official grand prize through Beatport, Revealed wanted to pick ours up as an official remix anyway.

4.) We saw that all proceeds on your Custom CS Headphones went to a non-profit. Tell us about that non profit you chose?
Mike – The non-profit is called Create Now, which is based in Los Angeles. They dedicate their lives to bringing vulnerable kids ages 2-21 in off the streets and teaching them how to express themselves through music and the arts, rather than through gangs, drugs, and violence. For more info, you can go to www.createnow.org.

5.) What's the story behind the name Charity Strike?
Mike – When I was a kid, I was a huge sports fan and played in multiple youth basketball leagues. I thought that the term ‘Charity Stripe’, which is a nickname for the free throw line in basketball, was ‘Charity Strike’. Other players on my team would make fun of me for thinking the wrong thing. The story came up while Philip and Is were trying to think of a name and it just stuck.

6.) Your remix of 3LAU's “Escape” has already received more than 100k plays on SoundCloud.. Tell us your inspiration for this track?
Philip- Yeah, it’s great to see that type of support! We had a lot of fun making this one; we love the original and instantly clicked with this remix. It’s amazing to be part of the remix package and release on Revealed Recordings.