ROBBIE RIVERA drops summertime piano anthem GET ME OUT OF HERE 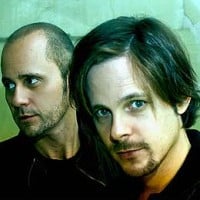 Booka Shade…One of those rare electronic music acts who channel the spirit and sounds of underground techno, but who can rock any festival crowd. The upcoming album ‘Eve' drops November 1st but you can stream the highly anticipated full-length album right now.'Eve' offers a titillating slice of electronic mastery with 12 tracks built around “Love Inc”, the first single from the album. The rest of the album offers jazzy bits of piano, trombone by Groove Armada’s Andy Cato, characteristically ‘Shade percussion and even a vocal feature from house producer Fritz Kalkbrenner tying together “Crossing Borders”. You’d be hard pressed to find another release in 2013 that is so pleasing and at times experimental.