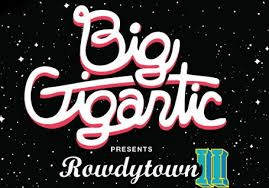 Big Gigantic returned to the beautiful Red Rocks in Colorado this year for their second Rowdytown event. Ghost Pixel, a company based out of Colorado, was asked to come back this year to provide visual mapping on the rocks after their debut Red Rocks performance at last year's event. Rowdytown I was the first event ever to feature projection mapping on the rocks at this venue. Ghost Pixel had their work cut out for them, but it sounds like success to me, “6,400 ft above sea level, 10,000 screaming fans and 280,000 lumens equaled the biggest and brightest projection mapping production Red Rocks and Colorado has ever seen.”

BIG marvelous venue, BIG visuals on “100 ft monolith rock walls,” and BIG Gigantic came together to create a visually stunning and musically mind-blowing event. “The 3D mapped animations were designed in collaboration with Big Gigantic and their lighting director to visually compliment the custom stage production. What resulted was an array Colorado themed images, dinosaurs, dollar bills, crumbling rock and cats shooting lasers from their eyes…Yes, cats with laser eyes. The night ended with an unexpected encore that blacked out Red Rocks, revealing a chromadepth 3D Ghost Pixel finale leading into a brand new Big Gigantic song that rocked Morrison, Colorado.”
Watch the video below to check out Ghost Pixel's work at Rowdytown II.

As the global pandemic continues to put the music industry on hold, music festivals, musicians, and DJs are taking their skills to digital music...