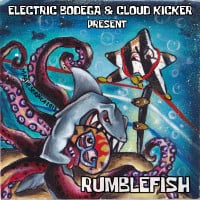 New York based DJ and producer duo Electric Bodega have released their debut EP titled RumbleFish. An 8 track release featuring remixes from artists such as Future, French Montana, and Swizzy Swinton. Electric Bodega has been featured on SiriusXM, New York’s Hot97, and Power 105.1. This is a solid, twerk worthy EP you should definitely check out!