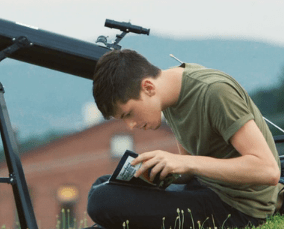 Recently, Skream has released a new disco track entitled “Rollercoaster”. Now, a music video is available to watch on the web via Skream's Vevo channel. It has been noted that over the past months that Skream has been infusing disco into his live sets, however this is his first actual release in this genre.

Within this new video, it is seen that a young man and his assumed girlfriend plan to go out in style with a comet heading towards Earth. Just as the comet is about to collide with Earth, it turns into a disco ball and parties are in full force across the world.

Check out the official video for “Rollercoaster” below!