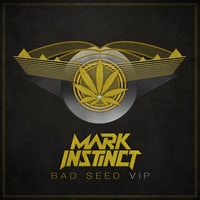 I stumbled across Mark Instinct two Saturdays ago when he performed at Webster Hall's ‘BASSment Saturdays,' a weekly event hosted by Subset. First of all, I want to say that the basement in Webster Hall is a really raging time, and if you are in the New York City area it is definitely something to check out. This is especially for those people that like that smaller venue feel and heart thumping bass that seems to shake the entire little room. Last week Mark Instinct released the VIP version of his already released track ‘Bad Seed'. If you've listened to the original than I don't need to tell you how amazingly hard and grimey it is, also featured in Excision‘s 2012 Shambhala Mix, but the VIP turns it up another notch. Plus, who doesn't love some Drumstep? The track has been released as a free download. So, you have no excuse not to check this out.

If you like what you hear then show Mark Instinct some love on Facebook and Soundcloud.
You can also see what’s up with Webster Hall's BASSment Saturdays on their Facebook.