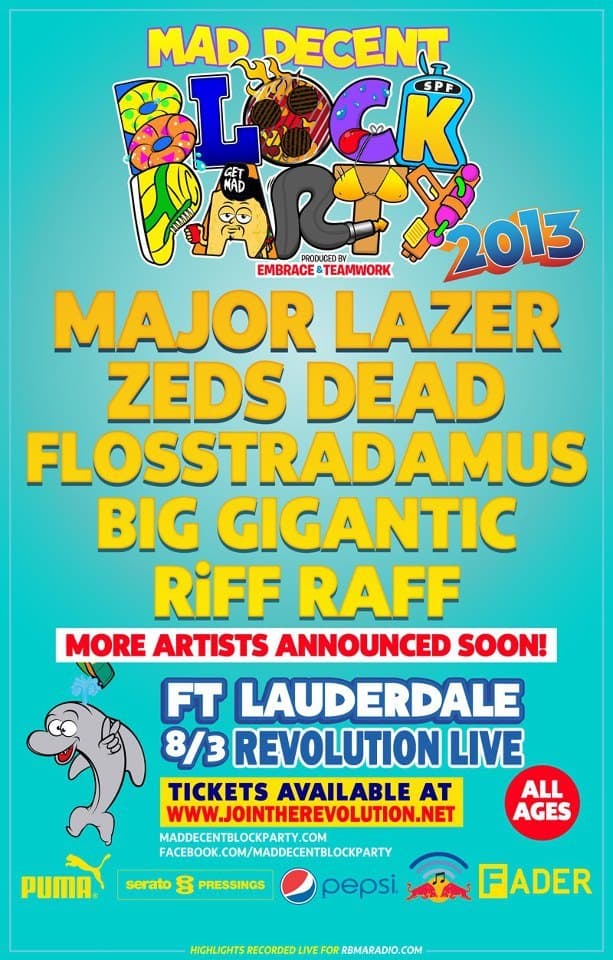 This past weekend EDM Sauce attended The Mad Decent Block Party in Downtown Fort Lauderdale. As the events gates opened black skies and thunder pressed over Downtown Fort Lauderdale. As Florida's summer gone so far, it was bound to pour down on this block party. As hundreds of fans of Mad Decent lined up, they found themselves in a extremely long line that snaked from the opening of Revolution live all the way around the block and two streets down.

The first act I saw was Flosstradamus whose time slot was at 2:30pm which was the time the gate opened. With the majority of the attendees still in line standing in the pouring rain while Floss began to go on, many people had a rough start to their day. Flosstradamus didn't play long due to it being the peak of the thunderstorm.  Block party-goers embraced the rain and everywhere you looked you could see half naked girls frolicking in the in puddles of muddy water. Next up was Miami's DJ DZA who is new to Mad Decent and was a late addition to the lineup. His set pumped the crowd up bringing bass filled hip hop and heavy drops. By 4:30 the party really began as Atlanta's very own HeRobust took the stage. The energy of his set was incredible. He started strong dropping his Yolanda Be Cool & D Cup “We No Speak Americano” remix. The crowd was raging and track after track this young producer had the crowd womping and in high spirits

Next up was whiteboy rapper and vine star Riff Raff. The crowd went wild as he dropped a new song with Chief Keef called “Cuz My Gear” and showered the crowd in champagne. Riff Raff had a short set only playing aroughly out five songs. Regardless, Riff Raff's set got the crowd turned up and was a sure reminder that this wasn't a normal EDM concert. When I asked friends and concert-goers to describe the event in three words I got several different responses but the one that I thought was most appropriate was wet, filthy, and a complete twerkfest. Later that night Big Gigantic took the stage with live music, Dominic broke out his saxophone and was mixing on his Laptop and Jeremy on the drums. BG delivered an unforgettable concert experience that kept the crowd dancing to smooth jazz melodies mixed with bass lines that had the crowd on a different level.

As the sun went down one of the most anticipated acts of the night took the stage… Zeds Dead. Everyone began to put their Z's up as Zeds Dead came on. Zeds Dead delivered a full hour set of drum n' bass/dubstep that set the crowd off. Dropping tracks featured in their Altered States mix, I for one was jamming out to their amazing and different sounding music. Three tracks they dropped that stuck out to me included an incredible trappy sounding remix of Sander Van Doorn's “Joyenergizer,” a remix of “It's You” by Duck Sauce and their famous remix of “Rachet.”

Finally as 9:00pm approached Major Lazer took the stage. Let me tell you, I have been to numerous shows and festivals but have never seen Major Lazer live. They put on the best show in EDM in my opinion interacting with the crowd like no other! They know how to throw a party! Diplo, Walshy Fire, and Jillionaire went crazy throughout the entire set shooting cannons of streamers, flirting with babes in the front row, and dancing around as they got the crowd ready for a wild set. Throughout the set Major Lazer dropped their well known songs such as “Get Free,” “Watch Out For This” and “Jah No Partial.” Diplo showed up to the set swagged out in a suit and tie which quickly came off as he mixed his music shirtless flaunting his six pack. To keep things interesting the Major Lazer crew started picking out sexy girls from the crowd to be the on stage twerk team for their booty shaking anthems. As young girls were shaking their asses for Diplo's attention the production team began blowing up Diplo's trademark hamster ball. Diplo soon after entered the ball and went crowd surfing which really got everyone amped up. As a request by Major Lazer the crowd was told to take their shirts off and spin them around and later were told to throw their shirts. As the music was bumping, shirts were flying and girls were twerking I knew this was the craziest party of the summer.

Although this party used to be free of charge and was now $40, the fee to see these acts was most definitely worth it! One thing I know for certain after attending this event, NO ONE throws a better party then DIPLO!