The Crystal Method Is Back On Tour
Advertisement 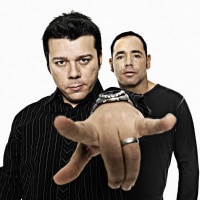 Scott Kirkland of The Crystal Method had surgery on April 11th, 2013, and within a week was back in the studio. However, he then contracted an infection and ended back up in the hospital where he spent the better part of the next 10 days in ICU. As a result, the release of the band’s fifth and much anticipated studio album, was pushed back to early fall and a number of tour dates were postponed or cancelled.

Despite surgery and complications, The Crystal Method is back on tour, their most recent show was in Albuquerque, NM. I spoke to a fellow Turntable listener who attended the show and he stated “They tore us a new one! They didn't play a live set as I had hoped, but they mixed it up like madmen!”

They will continue their tour in Dallas, TX on July 27th followed by Aspen, CO on August 9th. Check out their schedule here .

We are still waiting for an official date for their album “The Crystal Method”, but we are happy to see that Kirkland has recovered and the group is back on the road! In the meantime listen to The Crystal Method’s weekly mix “Community Service” every Wednesday at 9PM PST / 12 EST on Sirius XMs Electric Area. You can also listen via Sound Cloud. I have included their most recent mixes.

In this article:The Crystal Method