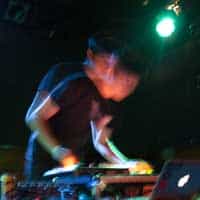 Giraffage, California-based produced Charlie Yin, creates smooth and energetically textured future funk tracks. Songs like ‘Orgsm’ off his 2011 release Comfort build from glitched-out and repeated synth phrases that seem frozen and chopped, coated with 808 hits like sprinkles, only to melt away and reform again. It’s music that seems to pull equally from the realm of technical delight and complexity of artists like Four Tet and Aphex Twin, as it does from sounds aesthetically sensuous and careful (think R&B and pop). For a sample of this sound in action, check out Giraffage’s bumping reimagining of Janet Jackson’s ‘Someone to Call My Lover’.

Giraffage was second on stage at Schuba’s to a room not quite full, but reverent and extremely attentive. His live performance played heavily from past releases. Yin looked calm on stage, fresh off of a European tour with Mister lies, and went to work recreating his tracks on an APC. The set built smoothly and whisked the crowd into a smooth frenzy. ‘Luv’ bumped out the speakers and had the room bouncing. R&B remixes worked as counter-weights to songs entering darker, down tempo territory while the reverbed 808 pads and warbled samples echoes into the night.

Over the past few years, Giraffage has gained a cult following online, and this was very evident from the crowd. While the room took some time to fill up, it seemed everyone knew just when snare fills would enter a song or when the vocals would be samples. The recently released ‘Even Though’ brought smiles across the room. It’s difficult to think of a better measure of an artist’s ability to connect with an audience than to see if they’ll sing along to a chopped and screwed sample; at a Giraffage show everyone sings along. Giraffage let ‘Even Though’ play out and extended it into his mix.

Without missing a beat Mister Lies quickly took the stage as soon as Giraffage stopped. He quickly shouted hello and got to work quickly mixing glitch heavy songs. Lightning-fast transitions brought together down-tempo funk an dub with higher BPM tracks off his last release.

The performance felt fragmented. Each song and sample Mister Lies blasted from the speakers felt like pure gold, but would quickly vanish only to be replaced by another beat or texture too different from whatever preceded it. Perhaps this was due to a relatively short set time at the 18 and over show, but Mister Lies seemed to have too many incredible creations to share. Constantly shifting twists and turns made the disjointed mix more difficult to dance to than Giraffage, but was a clear indication of great talent and a good ear.