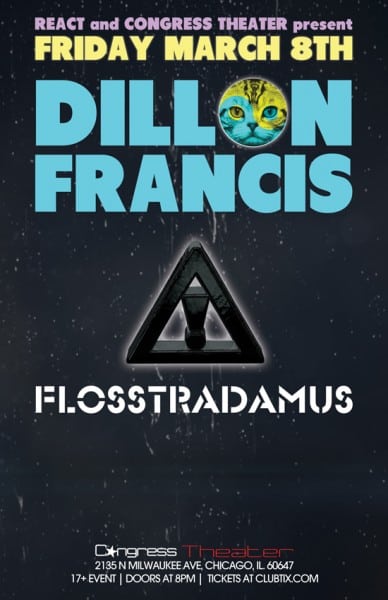 After missing Dillon Francis and Flosstradamus in Chicago on two separate occasions, I was ecstatic to have the chance to see both of them for the first time under one roof at Congress Theater. The three artists started off the weekend right with trap and moombahton for their sold-out show.

The two members of Flosstradamus, J2K (Josh Young) and Autobot (Curt Cameruci), brought down the house with a mix of some of the best trap tracks to date. When they played “Lana's Theme,” one of my most favorite Flosstradamus tracks, the combination of Lana's sultry vocals with the addictive trap beats completely shook up the Dance floor. I was pumped to hear my first Flosstradamus track, “Total Recall,” live, as well as a remix of “Jah No Partial,” which brought back memories of Major Lazer's set from the week before. The crowd was completely absorbed in the music, as they all rapped along to Kendrick Lamar‘s “Backstreet Freestyle,” a big favorite among all of us. The duo continued to feed the crowd, as they laid down trap versions of the all-too-familiar tracks like Hardwell's “Spaceman” and Bingo Players' “Rattle,” as well as some of their own trap remixes like Baauer's ‘Roll Up.”

Dillon Francis brought his unique personality and sounds to the stage through not only his music, but also through his highly entertaining background visuals. As promised on his Twitter, Dillon Francis came out with his suit and skinny tie. His charming look was humorously juxtaposed with his backdrop, which displayed a very neon array of colorful words from his Tour and Stuff video, a taco for DJ Awareness, and several absolutely hilarious images of his face superimposed onto cats (like this one). Dillon dropped down some serious with his top hits, “Masta Blasta” and “Masta Blasta (The Rebirth),” I.D.G.A.F.O.S., and his recent “Bootleg Fireworks,” along with some of his remixes including a remix of Zedd's “Stars Come Out” and Nicky Romero and Nervo's “Like Home.” He even brought in sounds from other genres, such as Skrillex‘s “Scary Monsters and Nice Sprites” and Feed Me's “Strange Behavior.””

Flosstradamus and Dillon Francis made music come to life on the dance floor, and it was quite the experience seeing the effect of trap and moombathon on a live crowd. Even though I (and I'm sure others,too!) was tired from being on my feet for so long, the high-energy beats kept all of us dancing for hours on end. Next time these guys are in town, I'll for sure be at their next show!

Putting his own heavy spin on Niiko X SWAE's “Eeny Meeny,” rising producer Martron creates an exciting remix to round out the year. Creating...

L*o*J are returning to their roots with the release of the massive new single ‘Supersonic,’ out now on FUXWITHIT Records. Hot off releases on...