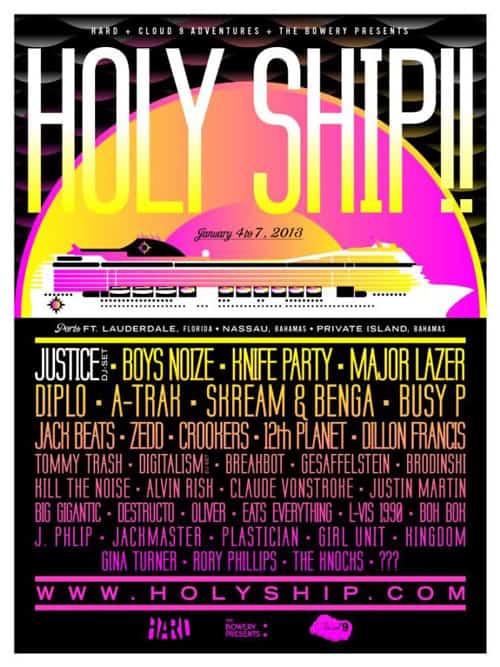 Yes, the EDM gods graced me last month and I somehow got my hands on one of the 8 extra cabins aboard the legendary Holy Ship!! It saddens me to write this review, knowing that only two weeks ago I was partying on a cruise ship sailing to a private island in the Bahamas along side some of the top EDM artists in the business. However, I have to say that it was by far my favorite music-related event/festival that I have ever attended, and have no question in mind whether or not to grab myself a ticket for next year.

The party definitely doesn’t wait to board the ship. With Neon gear out, boomboxes blasting, and “Holy Ship” chants roaring, ragers from all over the country unloaded from taxis and gathered to wait in line to board the MSC Poesia at Port Everglades in Ft. Lauderdale.

Once through the hours of security lines and checking-in, we boarded the ship and headed straight to the room to drop off our stuff and prepare for the night. Shortly after arriving to our cabin, we felt a slight rumbling in the floor. As we opened the balcony door, we could already hear the beats and cheers coming from the pool deck above; 5pm and the Sail Away Party had already begun.

One of my favorite things about Holy Ship!! was the size of the concert areas. No matter where you stood, you were able to see the stage, especially on the pool deck (main stage) where there was a wrap around 2nd floor to watch from. Also, the artists took no time or breaks in-between sets. One set would just smoothly transition into the next, usually with some sort of collaboration between the leaving and arriving DJs.

The most memorable set of the first night was the guest DJ spot. I may be bias, because he is my favorite EDM producer of all time, but spotting the iconic black-rimmed Glasses and half shaved hair of Skrillex squatting behind the turntables was the most exciting moment of my trip.

Laying by the pool while docked at Nassau, I finally had the chance to look around and see the other goers in the daylight. The mix of people on the ship was quite amusing, ranging from major bros, to purple-haired raver girls, to emo folk, to your average joe.

There was plenty to do on the ship for those who didn’t feel like wondering the island. During the day, there were yoga classes, a Twister competition, DJ lessons, a poker tournament held by Zedd, and a rather drunken/amusing mini-golf obstacle course hosted by Dillon Francis.

As the sun set, the party started once again. Although there was not one bad set of the night, I have to say, it was my first time seeing Zedd live, and he absolutely killed it. (And thankfully his computer wasn’t ruined from Kill the Noise spilling his drink all over it and bringing Zedd’s mix to a sudden halt the night before).

As we rode the boat over to the private island the next morning, the excitement started as a helicopter repeatedly flew by, snapping pictures and getting quite a reaction from the crowd. And as I expected, the beach was covered in bathing suit-clad partiers, dancing on both sand and in water to the bumping beats of Destructo, Brodinski, Diplo, and Justice. I could have died happy: great music + drinking + dancing + Bahama sun. (I also have to mention, I have never seen so many life-size inflatable animals and items in my life; note for next year).

With the help of a nap and lots of red bull, we made sure to make the most of the last night. Jumping from stage to stage, my two favorite sets of the night were Skream & Benga and Dillon Francis. It was pretty awesome to see all the artists partying and having fun together, especially in some of the smaller performing areas, most notably during Dillon Francis’ set when Skrillex and Zedd were dancing around taking shots from Grey Goose bottles and taking turns on the turntables.

Disembarkation
After a rather unpleasant 7:30 a.m. wake up call, we packed our things and headed to disembark the ship. While standing in line for customs and the thoughts of actually having to leave had begun to settle in, who cuts in front of us, but Skrillex himself (along with his entourage of 7-8 people of course). A great ending to an unforgettable weekend.