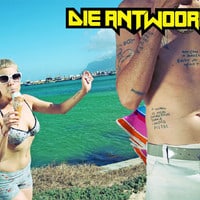 After a long but incredible weekend at EDC 2012, I am back with more new music. In fact, I have about 300 new songs to look through as well as upload my videos from EDC. Also after this past EDC, I've had a lot of inspiration in where I want to take EDM Sauce, so be on the lookout for new BIG things happening with the Sauce! Anyways, one of the new songs that I heard for the first time about a week ago on turntable was CRNKN's remix of Die Antwoord's “I Fink U Freeky.” CRNKN tends to do a lot of Trap and Trip Hop and this song does not disappoint to say the least. Give it a listen as this song is delightfully remixed.

In this article:CRNKN, Die Antwoord

The event and promotion company known as BLNK CNVS will be making their debut appearance at Art Basel in Miami between December 5th and...

After their successful 2018 edition of HARD Summer (you can read my review HERE), HARD Events has been teasing at the return of its...

In probably what is the weirdest musical feud of literally all time, Die Antwoord has responded to Eminem's small shot he fired towards the...