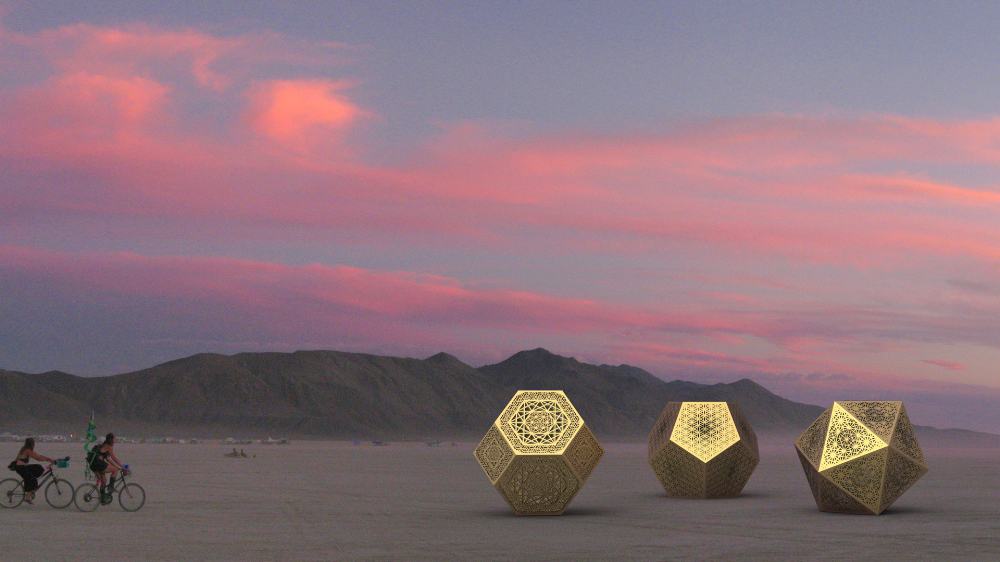 A recent piece and investigation by THUMP points out an interesting developing story from last weekend at the Billboard Music Awards in Las Vegas. A stage design for David Guetta and Nikki Minaj's performance is currently under some scrutiny for copying the design of a Burning Man art installation known by the group HYBYCOZO. It's a 12-sided structure with 5 sided panels with beautiful steel built geometric figures that emit light.

Yelena Filipchuk and Serge Beaulieuhe debuted their HYBYCOZO project through a kickstarter and unveiled it at Burning Man 2014. Filipchuk didn't watch the Billboard Music Awards, but many observers contacted her – some even wondering if she was responsible for the project.

Filipchuk stated in the article, “It was so egregious that people who weren't even that familiar with the project sent us messages asking us if we did the stage design!”

Pictures below show a side-by-side comparison of the HYBYCOZO dodecahedron on the left and Guetta and Minaj's stage on the right.

Filipchuk: “The size looks similar at six feet tall. The pattern attempts to be a copy, we zoomed in and the composition of the pattern matched exactly [a circle in a pentagon] on a grid of lines coming out of the corners. The shape itself even had the same thicker darker edges, glowing from the inside and matched the distinctive laser-cut repeating patterns that we are known for.”

The HYBYCOZO installations were one of the most iconic and photographed pieces at Burning Man last year. This picture below was taken from their website.

Thump notes in their article, “The HYBYCOZO team is hoping someone will own up to what they consider a forgery.”

Further analysis proves there is definitely an affinity for Burning Man style in Guetta's creative work. If you watch the video for Minaj and Guetta's song “Hey Mama,” there's very similar usage of something you would see at the Burn or a Desert Hearts event. The video features art cars other similar formations you would find at the event.

As the story develops, neither artist or Billboard have made a comment. We'll have to wait and see what transpires. Here's a screenshot of Guetta in the Music Video for “Hey Mama.””