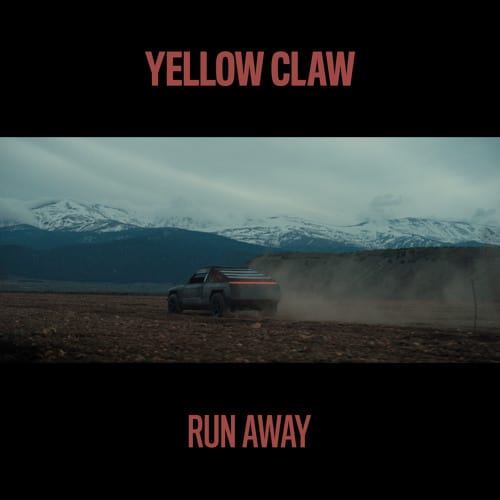 Bizzey, Jim Asagier and Nizzle compose Yellow Claw, a name often synonymous with trap, hip-hop and at times, hardstyle. Since their rise in late 2013, what with the release of the group’s first international single, Shotgun, which amassed nearly 50 Million views on YouTube, the Dutch collective earned fans’ stamp of approval on a global scale that launched their careers as dance music connoisseurs, and have Rolling Stone listing them as a Top 10 New Artist You Need To Know for 2015 . That being said, there will always be room for change. As such, Yellow Claw present their first single of 2015, Run Away – a considerable departure from the trio’s festival-ready style.

Dabbling in more subdued future house elements, Run Away heralds the start of a new chapter for the Dutch top-liners as they showcase their mastery of swelling sub bass and velvety percussion, paired with their signature hi-hats and rolling 808s. Accompanying the release of Run Away is the record’s official Music Video that tells the gloomy story of a female protagonist as she endures the struggles of her daily life.

The last twelve months changed the game for Yellow Claw as they topped festivals including EDC Vegas, Tomorrowland and Mysteryland, in addition to having entered the fashion sphere with their new clothing line, ‘Blood for Mercy.’ 2014 also saw the rise of their first-ever Record Label, Barong Family, which is now home to rising stars such as Wiwek, Cesqeaux and Coone.

Yellow Claw is back and ready for 2015 with their new song Run Away that delivers a brand new sound that they call ‘FuturePop' – look out for their new song that will be making new waves for this festival season.