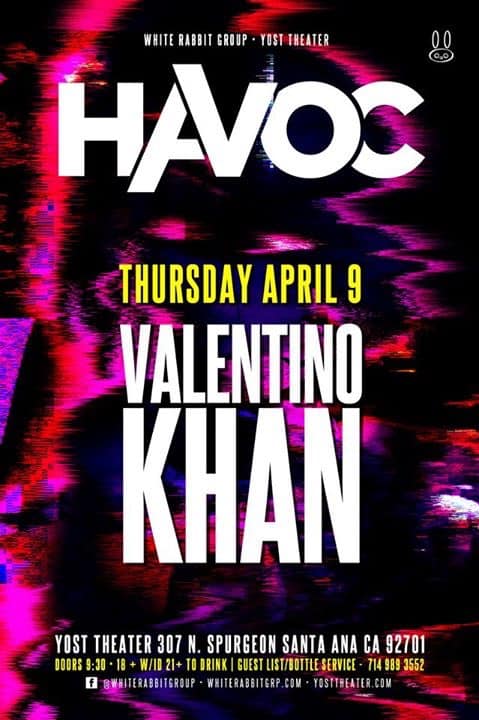 The most alluring thing about electronic dance music to me is hearing it live. These live events create atmosphere and energy that is impossible to forget. That is what keeps fans (and me) addicted to attending week after week. However, there are times where the passion and energy I have for EDM is diluted into the countless concerts and club events I attend. So many of these artists and outings seem to blur into one indistinguishable memory. Luckily for me, every so often, an artist and a venue will come around to restore my faith and re-ignite my interest into the scene and the music. I was invited by the White Rabbit Group to watch Valentino Khan last week on Thursday April 8th and this was one of those nights that re-awakened my temporarily dormant zest for electronic dance music with a large dose of insanity and havoc.

10PM Santa Ana, CA: I arrived to what I thought would be early enough on a Thursday night to enter quickly and have a chance to feel the venue out. I was absolutely wrong about that. A line had already formed that extended far down the street. In all respects Valentino Khan is absolutely amazing, but I had not seen a line like this in my life so I needed to find a reason for the excitement. I did my best to ask around and listen into conversations to find the reason for such a gathering and eventually found some answers within a few minutes. Twitter had been blowing up all day about not only an appearance by Jauz, but also the revealing of a new song collaboration between Tchami and Jauz. This caused sort of a mini uproar in the Orange County EDM scene and the fans were all over it. I asked Valentino about this backstage and he said people were tweeting at him all day about this event so there was a definite large buzz surrounding the event. Not sure if this was a strategy used by White Rabbit Group to promote the event, but nonetheless it worked perfectly to bring in a huge crowd.

Crowd demographic is something I really take interest in and is one of the things I pay attention to meticulously when viewing an event. The Yost crowd was most definitely younger and I would place 90 percent of the fans in the 18-20 year old range. Additionally, this was a niche crowd that was 100% trap music. Black 3/4 tees, bucket hats, and girls in short shorts and crop tops seemed to be the prevailing theme here.

11 PM: By this time the music and crowd were all situated into the venue and one thing was clearly evident, ORANGE COUNTY LOVES BASS. The sound system was LOUD, which makes the Yost pretty much any young Bass Music fans dream. There were two opening acts that were pumping out trap, dubstep, and a little progressive house to a crowd producing energy usually only reserved for headliners. The entire venue was jumping and dancing and held a heavy presence. Both floors of The Yost were absolutely packed by this point. This was one hundred percent a festival atmosphere confined to a relatively small venue clearly packed past capacity, but that did not seem to bother the fans (past a few frustrated rumblings about bathroom wait times). Signs, girls on shoulders, and most pits were a normal thing here. It was not for the faint of heart.

Midnight: I took a quick break outside to get a little cool air and noticed that there was still a significant amount of people in line still trying to gain entrance. This was absolutely preposterous to me because I have never seen a line past midnight anywhere besides Vegas or chic Los Angeles clubs. This event was on a Thursday night in Orange County. I did not expect the show to hold such magnitude.

12:30ish AM: There was a palpable feeling of anticipation for Valentino Khan to come on. The energy temporarily shifted from absolute madness towards suspense while waiting for the headlining set. From the second Valentino started playing, all of the previous energy I had experienced was suspended into a different echelon. This was something I have never seen before. The crowd was captivated. I have never seen a crowd react like this to a DJ. To say Valentino Khan has a sort of cult following is an understatement. These were passionate fans that were well versed and knew pretty much every song played. I love when a crowd is pumped up and ready to go, but I love when you can sense the excitement and energy from the DJ himself more. This makes for an incredible combination. Valentino Khan fed off of the crowds excitement and really created an interesting dynamic relationship with the fans. He was so excited and amped to be playing for this crowd. It was pretty cool and refreshing seeing that from a DJ.

1ish AM: Valentino Khan announced a special guest (which the crowd already knew to be JAUZ through Twitter activity earlier in the day), dropped “Feel the Volume” as Jauz joined him on stage, and the crowd was catapulted in a state of complete elation and awe. Valentino announced a new collaboration track between Jauz and Tchami that they debuted in front of a crowd that could not be more deserving and it was very well received. Look out for this track dropping soon.

1:30 AM: At this point Valentino Khan had already played his 1 hour allotted time slot, but stated he was having way too much fun too stop. The crowd ascended into pretty much unethical levels of craziness at this announcement and the next thirty minutes of the event were incredible. Valentino dropped “Deep Down Low” (side note: I was just at Coachella and this song was dropped in more sets than any other song I heard the entire weekend it was awesome) then paused the music only to drop his new collaboration with Flosstradamus “MFU” (otherwise known as middle fingers up). The crowd was so into it and if you click here can see a short video of the crowd's ridiculous energy for this track. Before Valentino Khan could leave, the owner of White Rabbit Group discovered that Valentino Khan had never stage dived so naturally he set the crowd up for that. This was not your typical stage dive. Valentino went out, dove off the stage, and was promptly punched in the face. It was madness and Valentino Khan was in fact excited about the monstrous black eye he received (Think Rocky after fighting Apollo Creed). It was the most appropriate ending to the craziest show I have ever witnessed. Valentino Khan thought so too and raved about how that was hands down the craziest show he has ever played in his life, as he took to the Mic at the end of his set.

This was an amazing show, there is not that much more I can say. The energy was unmatched to anything I have ever seen in Southern California. White Rabbit Group really seems to know what they are doing at the Yost Theater. They have found a great fan base that is there for the music and nothing else. I highly suggest checking out their shows in the future (if you are into the the type of show described). Any big artist will generate similar atmosphere to this last one. Here is a link to White Rabbit groups upcoming shows. Check out Valentino Khan's Instagram, Soundcloud, and Website for more music, tour dates, and additional content. He is an amazing artist and is on the brink of becoming an EDM superstar in my opinion. Also, if you are reading this Valentino Khan, please let me interview you!

*Bonus Content* Valentino Khan made a request that two attractive women in Dinosaur suits greeted him and brushed his mustache upon his arrival to the Yost. Click the link below to see.
Valentino Khan