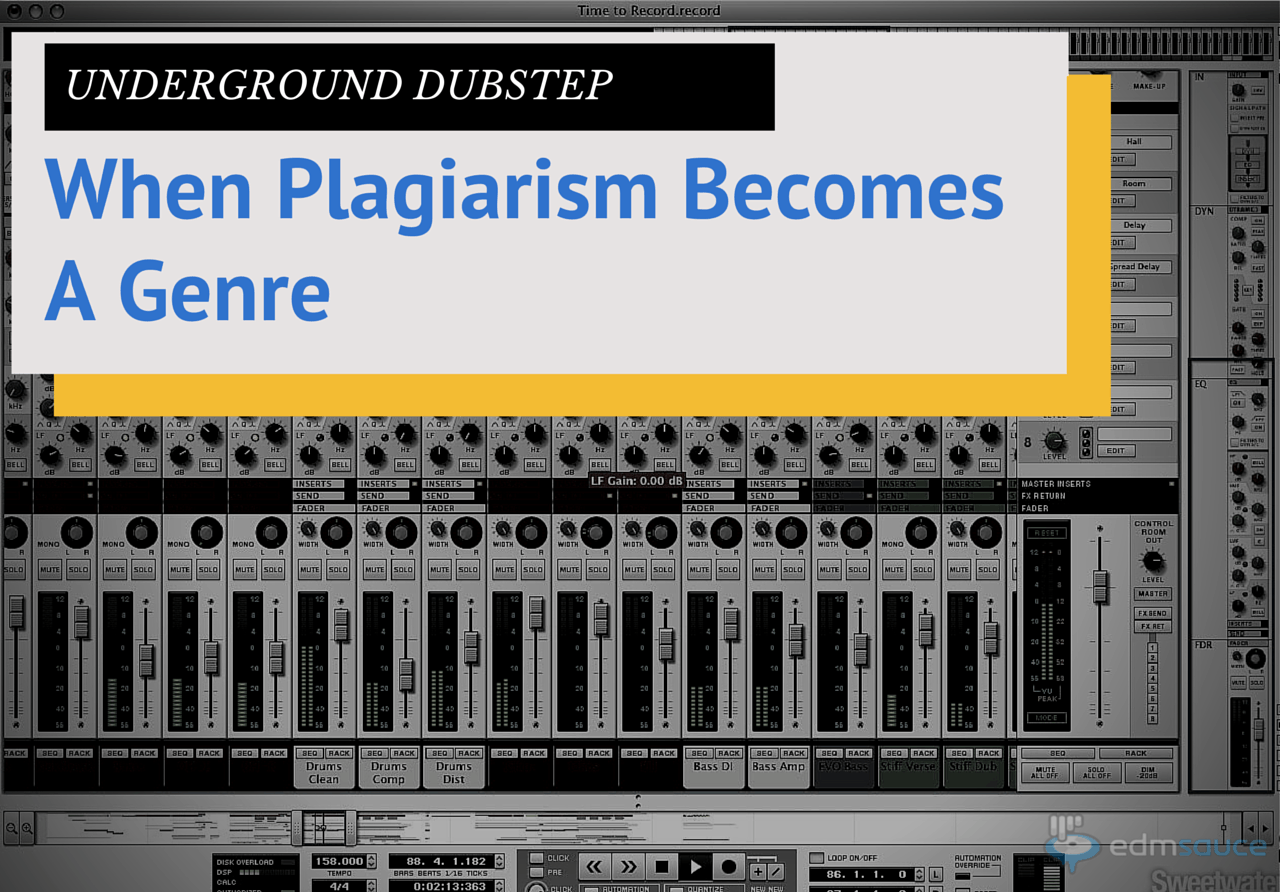 This Op-Ed does not express the viewpoints of EDM Sauce as a whole. The article was researched independently by the author in an attempt to accurately portray the underground dubstep scene and its accompanying culture.

A few years ago, an unheard of Dubstep producer started to make sounds that nobody had ever heard before. The noises were so original, and the production value was so high, that his productions were an instantly memorable. People ranging from those firmly rooted in the dance music culture to those who live by the billboard charts embraced this new sound. It became the next big thing, and it’s creator became an overnight sensation. His name was Sonny Moore – also known as Skrillex. In the scheme of things, Skrillex was just one of many talented producers in the dubstep genre, which had been around for decades.

Either as a result of the huge popularity of the sound, or maybe a tipping point in music trends, we'll never know… but something that nobody saw coming started happening. Strangers to the dubstep genre embraced this new style. Then bedroom producers began to imitate it and gain these newbie fans. The producers plagiarized Skrillex’s sounds to the best of their ability, in hopes of replicating it, and many times they successfully fooled influx of uneducated new fans and replicated the success that it brought its creator. Disappointingly, originality and innovation started to become hard to come by. Producers with little talent could fool people into thinking they had talent. Producers with potential decided to throw away their own original sound in order to take the fast track to success. And of course, the brilliant sound design that Skrillex created was no longer his sole invention. To the world, the Skrillex sound was just another kind of Brostep.

The same trend has started to occur with a lesser known style of Dubstep. A sound that was exemplified by the likes of fairly unknown producers like Trollphace, Megalodon, and JuJu, showcased through lengthy live streams. Skrillex himself noticed the uniqueness of the genre and quickly picked up Riddim producers for his OWSLA label. He figured the next big thing in Bass Music was here. But before its champions were able to bring their masterpieces of production to fruition, bedroom producers started copying it. The original sounds and ground breaking, simple arrangements were no longer the brainchildren of their creators, they were now simply Riddim. The influx of low talent Riddim producers diluted the beauty of the genre just as they had cheapened the dubstep genre itself before.A melting pot of eclectic producers who gain self worth and validation from the obtaining of dubplates (unreleased tunes) and other sources of Facebook recognition. Everyone wants the latest VIP, or the hottest plates.

This has turned the underground Dubstep scene into what is akin to a terrible high school like hierarchy. In this hierarchy, originality is rarely appreciated more than having the most sought after track of the time. Fame is not measured in terms of commercial success, as much as how many unreleased tunes grace their personal library. People are not concerned with producing art, as much as looking cool to those that they put above themselves. This problem is so rampant, fan girls exist in this community who shamelessly self promote in hopes of using their connections to create personal Clothing lines. This is killing the legitimacy of Dubstep.

Sadly, this isn't an uncommon theme in the music business, and particularly in electronic music generally. Truth: success-hungry individuals without real talent have irreversibly damaged the Dubstep scene as a whole and its subgenres. As they continue to do in many other genres as well. Increasingly younger kids are so hell bent on superstardom that they attempt replicate whatever is the hot new track, instead of working to create their own original signature. This in turn makes a truly innovative sound go stale increasingly fast. With these “original” productions becoming the norm so quickly, true innovators are unable to continue to perfect their productions into the vision they initially had. To stay relevant, and make money from touring and record sales, producers are forced to continue to change their signature sound to fit that of the fans expectations.

[pull_quote_center]younger kids are so hell bent on success that they attempt replicate whatever is the hot new track… instead of working to create their own original signature.[/pull_quote_center]

The Music Industry is hard to make a living in already, but the hoarde of copycats make it even more so. A totally separate but equally depressing problem is that producers constantly are trying to trade their unreleased prize tracks to more established producers in hopes of receiving a song that they will be able to brag to others about having in their possession. Big name producers secretly suck in these tracks and release them, sometimes without contributing much to the track itself at all. You'll see ‘collaborations' between a group of 4 producers, none of whom actually contributed much to the track itself. Last year we spoke with songwriter producers who told us in confidence that they'd done 6 tracks, none of which were released under their own name. But they felt flattered that high profile DJs wanted their sound – so they'd given them freely… and gotten no recognition for their production. Is this right? Is this good for the producers? Is it good for fans? Meanwhile, we have other producers who make a living by faking their sound, faking their Facebook likes, faking their twitter followers, and playing to shows full of fans who have no idea that not a single track played was produced by this person at all.

This is the real reason for the writing of this article. The hope that the clear picture of what the scene has become and honest discussion about whether it should be that way is maybe a good way to initiate change or at least make fans aware. Because it's probably too much to hope for that producers will stop trying to sound like those they admire and create their own unique sound, or that people who have no idea how to produce will stop calling themselves producers. There is no shortage of talent in the underground Dubstep community. It just needs to be properly channeled to create a scene that is not slowly destroying itself, based on a series of bad decisions by both sides.