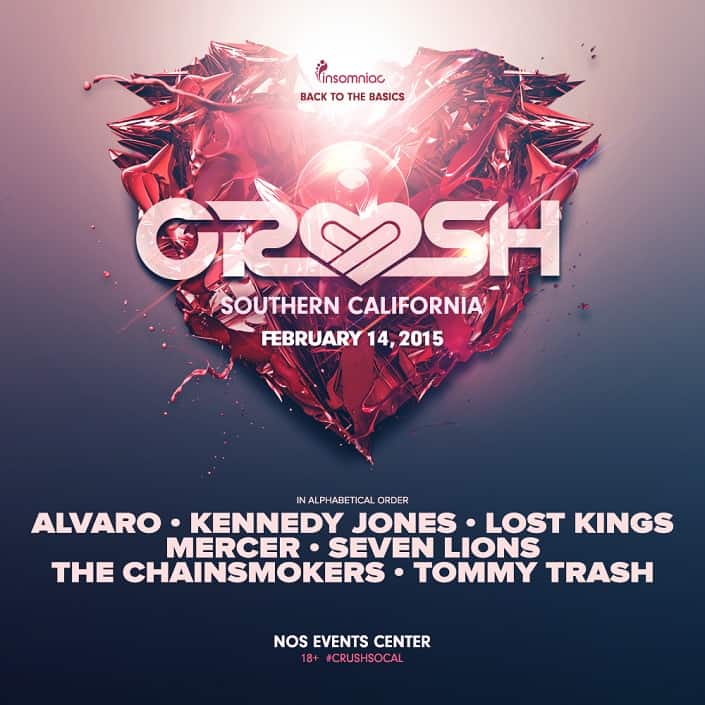 As I made my way to San Bernardino, CA, my excitement for Crush SoCal only grew. It was Valentine's Day and I was already spending it with some great friends and Crush SoCal was just the icing on the cake. With a stacked lineup that included Kennedy Jones, Seven Lions, and Tommy Trash, I couldn't wait to get to the hotel and get ready! Luckily, we stayed at the Orange Show Inn, so we were less than a mile away from the NOS Events Center.

I get to the hotel, check in, and see that most of the people staying there were headliners who were just as excited as I was for Crush to start! Some of my friends were even staying there too, but the best part is all the new friends that were made.

We began the short trek to the NOS Events Center and when it was finally in sight, the anticipation was overwhelming. I could see the all the headliners in their festive outfits and Kandi. Once we passed security and headed inside, my group and I immediately went to walk around and figure out where we were going to dance the night away. Alvaro was on stage as we walked in and he was killing it! My legs were already sore from the short walk (That's what I get for being so out of shape), but I didn't want to stop dancing. I began to look around the crowd and saw couples, groups of friends, and even people who went by themselves, all celebrating Valentine's Day with one another and the love was there.

Crush SoCal was inside one of the buildings at the NOS Events Center, so it was a little hot at times, but that's expected when you have such a large amount of people. Seven Lions' set was by far my favorite. He played everything I wanted to listen to and when he dropped ‘Strangers,' I lost my mind! His melodic dubstep style was even better than any of the several other times I've seen him. Like a fine wine, his sets only get better as time passes. The Chainsmokers‘ set was alright, but it got to the point where myself and many others decided to head outside. I gave kandi to some awesome people I met there and received kandi in return. Tommy Trash closed out the night and what a way to close it out! When he played his collaboration with Sebastian Ingrosso in ‘Reload,' the crowd went wild and we all sang in unison in what was the definitive moment of Crush SoCal! He closed it out with a remixed version of Rage Against The Machine's ‘Killing In The Name Of,' and the energy was electrifying.

Crush SoCal made it's triumphant return to the NOS Events Center for a second time and I couldn't imagine a better way to spend my Valentine's Day than to be surrounded by good friends and new ones. Whether it was the crowd singing in unison or just trading kandi with some really great people, Crush SoCal was without a doubt one hell of a way to celebrate Valentine's Day. I can't wait to see how Insomniac outdoes itself next year!