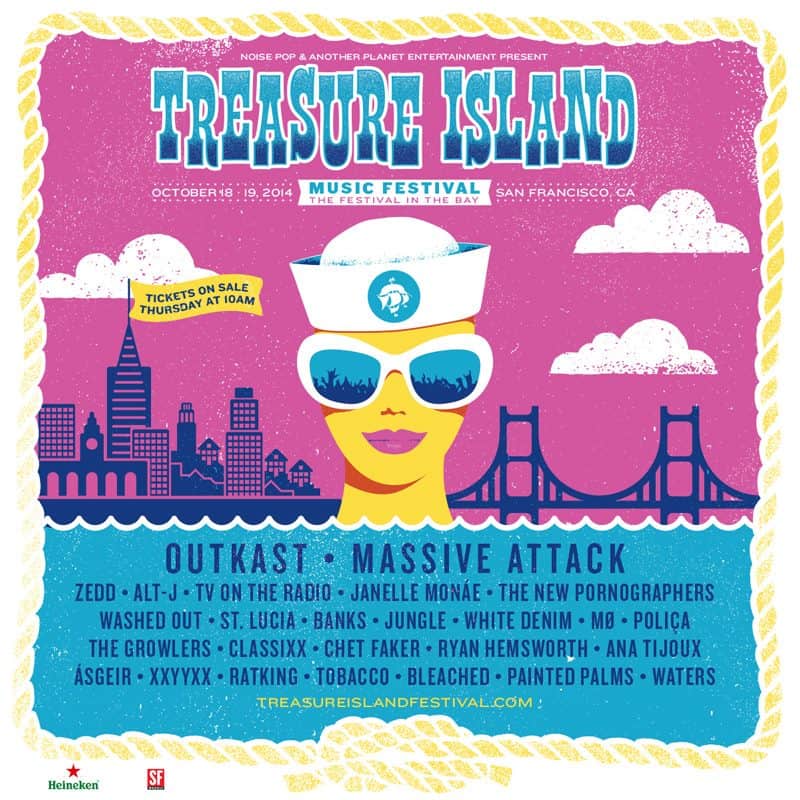 Pink skies, the sun setting over the Bay, the San Francisco skyline in the background, all set to the sound of amazing music from some of the top stars in the game. This weekend will be my 4th year attending Treasure Island Music Festival, and I could not be more excited.

Taking place on a small island halfway between San Francisco and the East Bay, Treasure Island is an annual festival put on by production companies Noise Pop and Another Planet Entertainment. Nearing the end of festival season, Treasure Island is like a breath of fresh air: laid-back atmosphere, beautiful scenery, no overlapping sets, and an eclectic, up and coming line up.

While the 2014 lineup boasts some impressive performers (Outkast, Massive Attack, Zedd, Alt-J), Treasure Island also prides itself on showcasing some of newer, on-the-way-up artists. Get the most out of your weekend, arrive a little bit earlier in the day, grab a beer, and check out some of the musicians below:

Chet Faker:
Known to many EDMers as the seductive voice featured in many Flume songs and remixes, Chet Faker is an Australian electronica musician who is quickly making his way to the top of the charts. In the past two years, 26-year-old artist (birth name Nicholas James Murphy) won Breakthrough Artist of the Year and Best Independent Single/EP at the Australian Independent Record Awards and Best Independent Release at the Rolling Stone Australia Awards. Personally, Chet Faker is the performance I’m most excited for.

Ryan Hemsworth:
I first heard of Ryan Hemsworth earlier this year on Holy Ship but unfortunately didn’t get the chance to see him perform. The Canadian DJ and producer got his start remixing a large variety of genres and hits such as Kanye West‘s “All of the Lights,” Rhye “Open,” and Lana Del Rey’s “Summertime Sadness.”


XXYYXX:
Relax a moment this weekend with experimental electronic trip-hop artists XXYYXX. At age 18, XXYYXX headlined the San Francisco Noise Pop Festival last year and has gained respect in the indie industry with his unique sound and vibe.

Painted Palms:
San Francisco-native duo Painted Palms is starting off Saturday right with their chill, weird sound and fun, dance tunes. Cousins Reese Donohue and Chris Prudhomme began making music together a few years ago over the internet, and have since toured the world and released a debut album, Forever, via Polyvinyl Records.

Check out the Treasure Island website for the full lineup and more information.

Have fun this weekend, and be safe!