Coka Cobra Debuts on Tchami's CONFESSION Label With 'Wind Up'

JackEL, Bobby Duque, and Britt Lari Team Up for Dreamy Collaboration on Feel Good Track of 2020 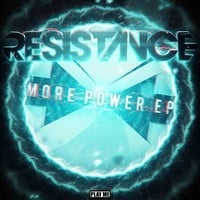 Back from the long weekend and feeling sluggish? Get yourself pumped up with some crazy new tunes from Resistance. The UK based producer delivers some hyperactive electro fire with the new EP, “More Power.” It was released yesterday on Play Me Records.

Self-described “Nosebleed Electro” and “Gnarly House,” the mysterious Resistance delivers as suggested with these tunes from the start of this four-track EP. “More Power” is some serious, heavy, and wild electro that rises and drops with tons of bass and extreme dubstep that might remind you of SKiSM or Far Too Loud. “Badman” is another energetic ride that starts off with some reggae vibes and sounds aided by nice drumstep and turns into some hard, bounce-style dub. “Resistance Theme” is an epic mind warp that takes further down the rabbit hole while “Gets Me Goin'” combines lighter robotic sounds and a pretty melody aided by claps that has an unexpected, insane drop into some catchy electro house.

This whole EP is so future it hurts, meshing electro and dubstep as well as any before it. Have a listen below. You can buy the EP HERE and make sure to follow Resistance for more at the links below. Enjoy. Resistance Website Soundcloud Twitter Facebook YouTube

In this article:More Power, Play Me Records, Resistance