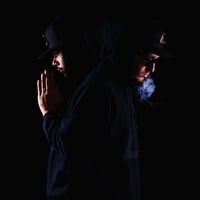 Congratulations to Josh Young, one half of the popular trap duo Flosstradamus, on becoming a father this morning when his wife gave birth to their baby son. Young took a few weeks off to be with her during pregnancy while Waka Flocka took his place on Tour at various shows. Josh (J2K) and Curt Cameruci (Autobot) announced today via their Twitter account that the baby was born this morning.

Josh also posted this on his personal Instagram, letting us know his son was named Lexington Raymi Young.

Follow the guys for more updates and congratulate him on the new member of the family. Looking forward to seeing you back on the road, Josh!

Advertisement. Scroll to continue reading.
In this article:Flosstradamus