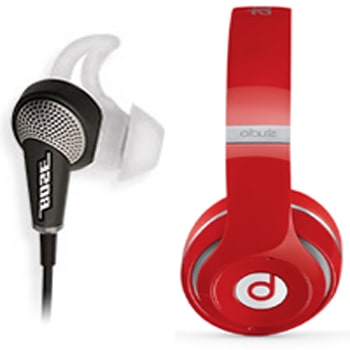 These technologies are all used in Bose manufacturing of the QuietComfort 20 & 20i Headphones (retail: $299.95). So, not only has Beats allegedly stolen the technology to produce their headphones, but they also are charging more for the final product!

The statement made by Bose (below) suggests that the property stolen is the product of more than 50 years of research. Bears – founded in 2008 – will be fighting an uphill battle against the industry veteran.

“To protect its investments, Bose has sought patent protection, and owns many patents and patent applications. Because Bose invests heavily in research and development, and because Bose has built its reputation on producing superior products through innovative technology, Bose’s continued success depends in substantial part on its ability to establish, maintain, and protect its proprietary technology through enforcement of its patent rights,”

The lawsuit comes at a particularly unfortunate time for Beats. Just this past May, Apple announced their plans to purchase the audio company for $3 billion. Apple is already buried up to their armpits in legal filings claiming patent infringement from Samsung. It's possible that the accompanying baggage attached to Beats could turn the impending deal sour.

Bose public relations director, Carolyn Cinotti, would not comment directly on the lawsuit, but did issue the following statement:

“The filing is comprehensive and explains our position, and as a matter of practice, we don’t comment on on-going litigation. We can share that for over 30 years, Bose has made significant investments in the research, development, engineering and design of the proprietary technologies found in our headphones. Bose’s patented technologies enable the exclusive performance found in our QuietComfort® Acoustic Noise Cancelling® headphones. We are committed to protecting our investment, protecting our customers, and defending the patents we own.” (obtained from forbes.com)