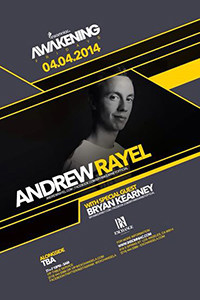 The day has finally arrived. Armin Van Buuren's wonder boy is finally hitting the USA's West Coast and debuting his first show in Los Angeles tonight at Exchange LA. Following an unbelievable performance at Ultra Music Festival, where he debuted in North American soil and performed at the State of Trance 650 stage, we can only expect one thing: tonight will be magical.

A modern day “Mozart,” he combines a mix of classical sounds, chopped vocals, pianos, strings with powerful saws and synths that made him famous for creating a unique style of trance. For this reason, Armin has been pumping Rayel's music throughout the year and showing him a lot of love in his radio show A State Of Trance. From the small country of Moldova, Andrei Rață aka Andrew Rayel is the highest climber in the DJ Mag Top 100 magazine in 2013, debuting at #77 in 2012 and climbing an impressive 49 spots as fans voted him the #28 in the world last year. The steaks for 2014 are even higuer as his schedule is starting to get very busy.

“I believe music is a universal language that unites people with nothing but love. I intend to make sure that my tracks are all about emotions and happiness. That’s what’s driving music, making the world a better place.” says Andrew Rayel.

The show at Exchange LA is completely sold out. After Los Angeles, he will be heading to Oakland, Boston, Chicago and Philadelphia. Make sure to check him out in any of these cities.

In this article:andrew rayel, Exchange