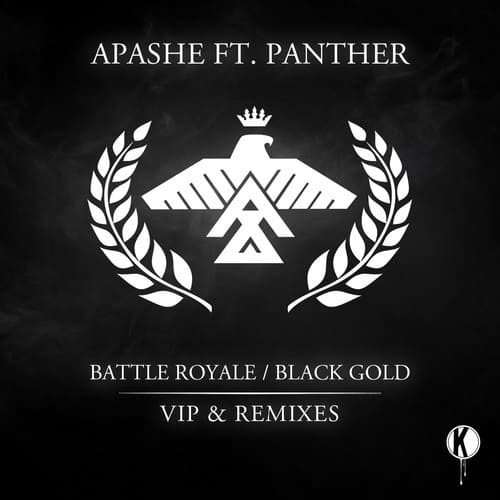 Ever since ‘Battle Royale' was released Apashe new it was something special. When the track turned out to be his biggest success yet, the Kannibalen heavy hitter already knew a VIP was necessary. Around the same time, the talented Julien Kauffmann teamed up with Apashe and the two instantly saw the image for one powerful video.

…As soon as Julien heard it, he ask me if we could do the clip for it. […] I realized that the track was, at that point, my biggest track ever. So I had to make a VIP of it and then the idea of shooting a video became more logical.

The video, just like the track, is gritty and unforgiving in its intensity. The clip was shot in a barren location which in addition to the harsh weather provided several difficulties. The brilliant juxtaposition of the black and white chess pieces as well as the dress of the both Panther and Apashe himself make for a visually appealing opening sequence. Just as a chess game quickens in pace and more brutal moves start to occur, the video becomes a true battle royale.

We were looking for ideas around the concept of a battle of course, one idea LED to another and a chess game came to mind. […] The challenge of this video was the unexpected weather condition we had to face. The spot is an old military bunker or radar at the top of a hill. It was really cold, the wind was blowing fast and we didn't expect snow in October.

Acting as co-director along with Julien, Apashe has to be proud of the end result. The video is masterfully shot and unique in all the right ways. Apashe also has big plans for 2014. While it looks like a United States tour might still be on the horizon the battle champion is bringing his heavy intoxicating brand of EDM all over Europe in a tour kicking off in May.

I am really looking forward to playing in the States, the scene seems so intense over there. But first I'm going to Europe in May. I already got plenty of requests for states but I need to get my visa which is in progress.

To push the envelope even further and thank all of his dedicated fans Apashe has put up his VIP mix of ‘Battle Royale' for free download through his Facebook. The full EP of remixes is available through Beatport for purchase. We cannot wait to see what Apashe has in store next. It seems like once this guy has decided to take it easy for a little bit, he comes back with even more mind blowing productions… and that is exactly why we love him.