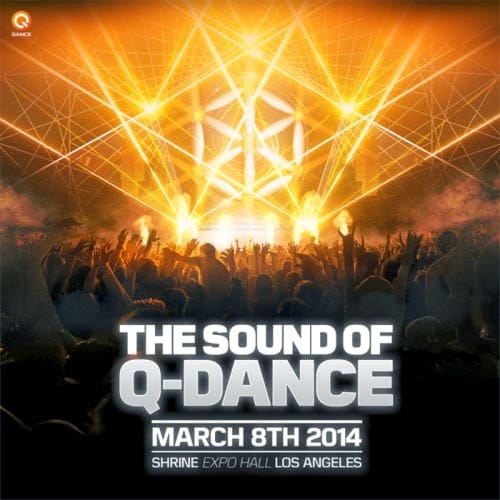 Q Dance made their second appearance in LA this last weekend with 7 hours of non-stop hard music. Making their break-through event last October was a remarkable night for having their first stand alone event in America. March 8th, 2014 marked the return of Q Dance and everyone was in for an incredible night. With headliners like Wildstylez, Brennan Heart, Frontliner, The Prophet, we were all in for a treat. Walking into the main room, the stage was enormous for The Shrine. A 50 ft petalled structure, flanked by pyro cannons, and two hexagonal light rigs, made this one of the most spectacular shows the Shrine Expo Hall has ever held. While looking up, the celling was decked in orange and white streamers with amazing lights coming down at the crowd.

Opening up the night was America's very own Mr Skeleton, who delivered a wide variety of hard genres for the early-comers. Next up was New York raised Sylence, who recently was the first American artist to be signed to Dirty Workz records. Sylence took the stage and provided the audience with uplifting melodies to get the mood right for what's to come later. By 9PM the night was had begun while LA's very own Lady Faith represented her sounds of the harder styles. Giving us her own tracks like ‘Moxie' and ‘Raising High', she got the crowd cheering and dancing for more. The Sound of Q Dance had gone off to an amazing start.

Next on stage was the one and only Wildstylez, who opened up with a great joke and played Deadmau5‘s ‘Some Chords' before going into his latest hit ‘Straight Forward' which in recent news has gotten him a bit of attention. Closing out Wildstylez set, the night was in full notion while Brennan Heart then Frontliner took the stage. Pounding bass-lines that would shake The Shrine, numerous high powered lasers that made an amazing light show, Q Dance definitely does not mess around with low quality shows. Closing the night was The Prophet, I anticipated this set for the whole night waiting for the BPM's to raise when he came on stage. Giving LA what they wanted, The Prophet closed out his set with 30 minutes of blasting, feet pounding hardcore. The Sound of Q Dance came to a close while the crowd chanted “Q-S-A” as we all waited for one last track.

Q Dance has once again made history, making this the largest stand alone hardstyle event in America. Q-dance will return to North America at Mysteryland May 23-26, 2014.

EDM-based biohacking collective, Wellness4Humanity (W4Humanity) is setting out to demonstrate how music-lovers can begin to safely gather in a post-pandemic reality with their Spread...

One of the most prolific hard dance anthems gets a 2020 reboot for a global audience with the English language version of ‘Child Of...